Seems like people trip over themselves trying to categorize La Luz. Are they a surf band? Riot Grrrls? Are they—gasp!—Feminists? These categorizations fail to take into account the band’s primary characteristic: like Van Halen in the ‘70s and The B-52s in the ‘80s, La Luz are first and foremost a feel-good party band. Adding La Luz to any event or get together is the fuel for the fire, the audio equivalent of social lubrication. You cannot be unhappy while their music is on. Yeah it’s surfy, but the lyrics aren’t about catching a perfect wave or getting sand in your shorts. Yeah, the Luzers are all women, but there’s a distinction between being a “girl band” and being good musicians who just happen to be female. OK, OK, yes—they are all super foxy. Like, Hollywood foxy. Consider this exchange overheard between two young women in the audience as the band took the stage:

Chick in audience #1: “Oh my god they’re all so cute! Which one do you love?

Within 30 seconds no one noticed if the band was attractive or not because the crowd was busy hopping up and down. Within three songs there was a big, sloppy mosh pit. By the sixth song, crowd surfing. The bar did a brisk business and no one in the sold-out crowd was bored or detached. Maybe that’s no big deal in some cities but Portland in January? That’s saying something.

The band sat down backstage to talk to Quip after their sound check while waiting for their dinner order to arrive. The four members of La Luz—drummer Marian Li Pino, Bassist Lena Simon, Keyboardist Alice Sandahl, and guitarist/lead vocalist Shana Cleveland—have a warm, friendly ease about one another, just like you’d guess they would. Sometimes they finish one another’s sentences. They laugh a lot. They’re cool.

Eric Evans: So are you guys on tour?

Shana Cleveland: We’re home. We’ve been in Seattle since November, I think. We’re going out again next month.

EE: For how long?

SC: A little over a month. We’re going to record for two weeks in L.A., then tour around the south.

EE: That was my next question, if you’re working on new stuff.

SC: Yeah! we should have our album finished by the end of February, so… but then it takes forever for it to come out. [All laugh]. You won’t see it for years. [Laughter]

SC: And cassette, CD. All that stuff.

EE: So, have any of you read the Interview Björk did with Pitchfork? She talks about being a woman in the music industry and how you have to say everything 5 tikes to be heard once, and I wondered if that was the case with you.

Marian Li Pino: Does she mean with sound guys?

EE: I think she meant overall, like if you had an idea for a video or just getting credit for the work she does on production, for example.

SC: Maybe it’s because she’s working on a bigger scale? I think the people we work with are good at listening, I guess. I mean, Hardly Art [the band’s label] is run by a woman so it would be, like, weird if she wasn’t listening to us because we’re women. Our booking agent’s a woman.

MLP: True. I feel like most everyone’s been pretty great, including sound guys. I don’t think we’ve really run into anyone horrible. Well, one.

Alice Sandahl: Yeah… Otherwise, in terms of making creative ideas happen, it doesn’t seem like a roadblock. [Others murmur in agreement] There are other aspects of it that are definitely not cool with dudes but people that we work with directly? Pretty good. EE: How long have you been working on writing songs for the new album?

SC: We’ve been working on songs for a while. One of the songs that’s going to be on the next album is something that we were gonna put on the last album, but at the last minute we were like “ah, it’s not ready yet, so…” So yeah, since then for that one, the rest for the last six months or so. Just between tours, kind of getting stuff together.

EE: Do you play new stuff while you’re on tour, try things out on the road?

SC: Yeah! We’ve played about half of them live.

MLP: We learned that from the last album. After recording it and not playing them live, and then going out and touring them, having the songs change after a while, getting nuanced, getting more pieces of us into them… we really wanted to have that happen on the next album—tour with the songs before we record them, or try to do that.

EE: Do you record your shows?

SC: You kind of end up seeing them and hearing them sometimes anyway, on YouTube or whatever.

EE: Do songs change as you play them live?

LS: You kind of discover whether something’s working or not.

EE: And it sticks.

SC: You kind of lock in a little bit when you play them too. They just get better, so it’s better to just work with them for a while before recording.

EE: I imagine your audiences are pretty open to hearing whatever it is you’re playing.

SC: I guess so. [all laugh] I mean, they’re gonna hear it if they like it or not. [Laughter]

EE: I talked to a couple of your fans upstairs and asked them. They said “whatever they want to play is cool.”

LS: Actually we don’t know that, but cool. [laughter] I feel like we definitely try to play new songs, but there are a few songs that we always try to play like “Sure As Spring”, “Call Me In The Day”, “Big Big Blood”.

SC: But usually if we ask “What do you guys want to hear?” it’s like…

SC: But other than that, people seem like, chill. We can play whatever.

EE: You guys going back to the east coast this year?

SC: Um… I’m sure we’ll go back when the album comes out.

SC: The last time we were there was in August. we played at the Museum of Modern Art, which was awesome.

SC: Yeah! We just did a few other shows on the east coast and came back. But we’ve been out there a few times. We started touring right away after we started playing as a band, so…

EE: What kind of music did you like in high school?

MLP: I was all over the place.

SC: I was reaaaalllly into grunge in high school—

LS: Yeah, me too! Like the Shins? Well, I don’t know. High school is different for me than these guys, actually. My sister gave me this, like, “indie mix part one” when she went to college and I was just starting high school and it had like The Shins, Built To Spill was on there…

LS: A lot of Elliot Smith was on there.

MLP: Alright, so that’s you. Your high school was my college…  [turns to Alice] What did you listen to?

MLP: You have to!

AS: I loved… Dave Matthews Band.

Someone with the band: I just saw him last week, actually.

MLP: There you go. Because you know he’s going to read this.

AS: I don’t know, real poppy stuff, like Christina Aguilera a little bit. I had a weird mix. I was also listening to Ella Fitzgerald, so I don’t know. OK, I remember a new Britney Spears album came out while I was in high school and I did buy that. [Collective laughter]

SC: You know how we should answer this question next time? Only mention obscure, like, super indie-cred stuff. We should be like, ‘I only listened to Pet Sounds, My Bloody Valentine’s first record’—

LS: —‘and this Swedish band you’ve never heard of.’ [Laughter]

MLP: For me it’s all over the place. First of all, I want a disclaimer: I guess I wasn’t really into music at the time. I was playing the drums a lot but I wasn’t listening to music, I just listened to whatever my family listened to, and one brother was like ‘you gotta listen to the Dixie Chicks’ so I started listening to the Dixie Chicks. And he listened to a lot of bluegrass so that’s where I learned to harmonize, so I will thank him for that. The other brother, though? He got me into Red Hot Chili Peppers which is what taught me how to do funk drumming. And thennnn… but then it gets worse. Like N*SYNC, Janet Jackson…

MLP: In high school. The really bad ones, though? I don’t know if anyone even remembers these bands. Yellowcard?

AS: Didn’t they have an electric violin player in there?

MLP: How did you know that?

AS: That’s quite enough.

SC: I think I already said. I was really into Nirvana and other grunge stuff…

EE: Well that’s not embarrassing at all

SC: Hmmm… I was going to say something but then I realized it would be mean to call that embarrassing. Ah geez, I don’t know.

AS: Maybe you blocked it out.

SC: I was on this field trip that my mom made me go on, it was for black students at high school. I was in AP class and it was like all the black kids go on this sailing trip together—a really weird idea. And I was like, “I don’t wanna go on this class trip,” you know, it was the week before my first year of high school and I didn’t know anybody. And my mom was like, if I go she’ll buy me this Smashing Pumpkins VHS tape I really wanted. So I was like “OK.” [laughter] So I’m in this van with all the black kids from my new high school and that song came on the radio and everyone was talking shit about it. And it was my favorite song at the time! And they were like “What is this shit?” That was embarrassing. [Rest of band awwws] But they were right. That song sucked. [Laughter] 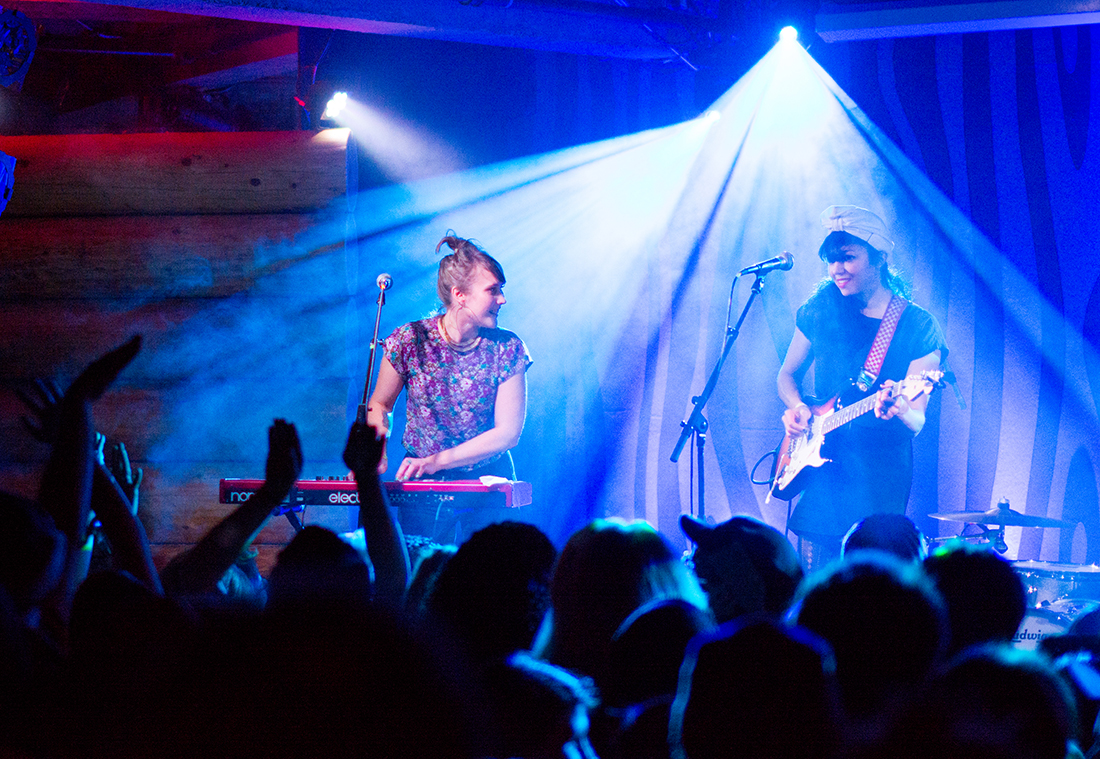 EE: Any goals for the year?

AS: Touring new places is a good goal.

SC: Yeah, I don’t know. I’m just excited for the album to come out. It almost seems weird to make goals because you can’t really control anything in this business.

AS: My goal is to get more productive between tours.

MLP: Yeah! I want to hop on to that one too. Someone needs to write a how-to on that.

EE: So are all of you full-time musicians?

EE: That’s great, usually the bands I talk to, nine out of 10 have regular day jobs, like bartender, barista…

SC: That’s a really surprising percentage actually. Like, I’d think it would be lower.

SC: Yeah… you have to make a lot of sacrifices.

MLP: You have to just commit to being homeless, I think. Yeah.

AS: That’s our goal!

AS: We have admitted, we have not committed. [All laugh]