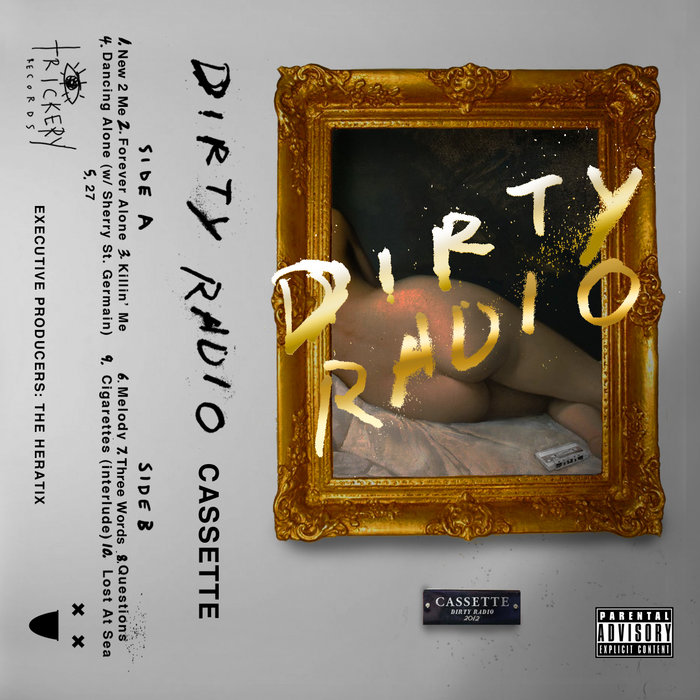 One might try and compare Dirty Radio’s lead vocalist Farshad Edalat well-known Canadian rapper/singer to Drake.  Their voices are similar, but that is where the likeness ends. Where Drake travels the more traditional rapper/singer route, Dirty Radio is an exciting blend of electronica, rap and rock, chill sounds mixed with strumming guitars, electronic beats, and one beautiful, soaring voice, which can all be heard on their upcoming album, Cassette.

Sound confusing? It only seems that way. The songs make perfect sense, even if you’re having a tough time figuring out which genre they fit in to. The biggest surprise about Dirty Radio is Edalat’s strong vocals.  What with the influx of elecronic/dupstep/dance music to hit the airwaves these days, the actual vocal talent has become a second thought for many bands and producers. However, Dirty Radio’s lead singer is more than capable of carrying a song on his vocal talent alone. The fact that he allows the beat to become prominent as well is almost an afterthought.

In general, some tracks are carried by a beat, others by a melodic or striking voice. It is rare to find an artist with the capability to allow both the vocals and beat to exist in equal strengths. In some songs on Cassette, you might think Dirty Radio is a jazz band – on tracks like ‘Killing Me’, you can almost see the band performing in a smoky nightclub at 2 a.m.

There is straight up R&B in ‘Cigarettes’ smoothly spilling over piano keys and falling straight into your ears. ‘No Good for You’ could be a classic rock hit, with strong drums and guitar to back up Edalat’s voice. ‘Lost at Sea’ is a beautiful ballad, that could be played on radio stations that play R&B, electronica, or rock. It’s such a beautiful song, you might even forget to care where it belongs.

‘Holiday’, the band’s single, outlines the band’s intentions–strong vocals, and a panache of dizzying beats. Listen to the whole thing – some of the songs on this album will make you dance. Some might break your heart. But at the end, you’ll realize something–you can’t really explain who or what Dirty Radio sounds like – and that’s a good thing.

Cassette will debut as a free download on July 31st via freecassette.com and dirtyradio.ca.