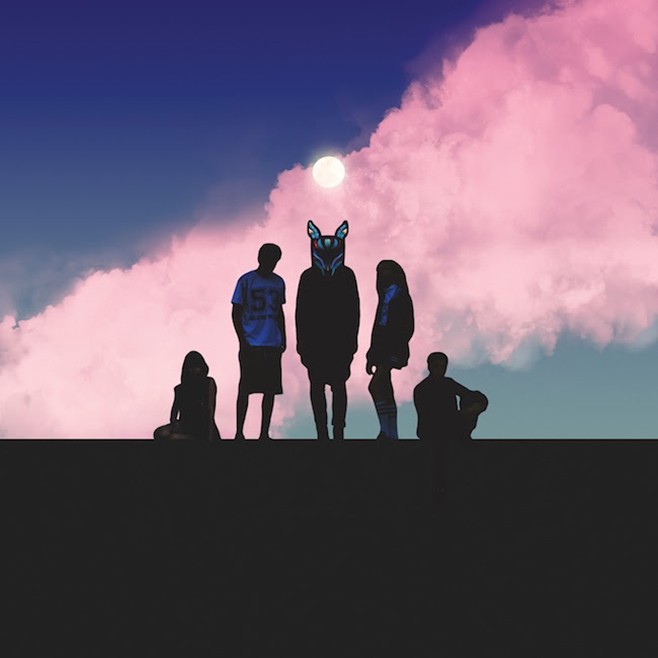 OK, don’t laugh, but do you remember Michael Cretu’s ‘90s project, Enigma? Before becoming something of a punchline, the musical collective released songs that crossed borders with ease, charting in over 40 countries. Picking up where Anne Dudley and Trevor Horn’s Art of Noise left off, Enigma fused soothing dance beats with limited vocal samples – Gregorian chanting, a handful of sung words, whatever would provide a soft hook without getting too linguistically involved. By not limiting themselves to full-on English lyrics, Cretu and his collaborators crafted music that could be enjoyed anywhere by anyone.

Which brings us to the entity known as Slow Magic. Appearing in public wearing an oversized tribal wolf mask and pointedly refusing to help categorize his style by divulging city or even country of origin, Slow Magic is carrying on the synth-dance tradition of Yellow Magic Orchestra, Art of Noise, and Enigma. The new, mostly instrumental record How To Run Away has two distinct threads running through it: a funk thread characterized by live drums and keyboard work that would make Dr. Fink proud, and a looped-sample thread designed to infect dance floors with its pulsing rhythm. How well these two things work together is up to the listener, but there’s an impressive tonal consistency to the album that transcends the individuality of the tracks.

Slow Magic’s sampled loop style might be more familiar owing to the irresistible new single “Girls” which, along with album track “Bear Dance”, showcases the technique. Far from the insistence of techno, these tracks insinuate themselves into you in a subtle way; it’s mid-tempo dance music that studiously avoids extremes of high or low. The loops, mostly processed vocal samples in the Enigma or Art of Noise vein (“On Yr Side” could be a track from 1986’s In Visible Silence), invite a more casual interaction than traditional singing but these loops organically ground the electronica, You won’t be singing along, but recent workplace experiments offer anecdotal evidence that anyone within earshot will be whistling the hooks hours later.

In the funk category are album opener “Still Life” – a big, tempo-shifting, part melancholic, part anthemic groove – and the one-two punch of “Hold Still” and “Youth Group”. The lattermost track fuses the two disparate styles together best and might be the most representative track on the album. It begins with a big repeated keyboard riff, then relaxes into a time-phase shuffle as the keys alternate between muted synth and stomping organ. Slow Magic’s confidence in these riffs recalls early Prince, there’s a great deal of repetition here as there is with much funk, but it works.

In 1997, hot off a solid 10 years of impressive and increasingly idiosyncratic solo work, former The Teardrop Explodes frontman, Julian Cope, launched his UK-based Head Heritage label. He released albums by artists like Thighpaulsandra (Queen Elizabeth 2) and his own more experimental work such as the Rite series, exploring the avenues first charted by the Krautrock bands of the ‘60s and ‘70s. But it was another release, This Is The Shit by Randy Apostle, in the guise of the fictional outer-space “Fønk” band Roger, that was his most unusual; white boy funk of the highest order, tongue alternately wagging or planted firmly in cheek. Why Apostle hid his identity within the Roger mythology only he can answer, but the mystery of a band with no earthly biography was novelty enough to encourage a listen and the power funk of the grooves contained therein were enough to keep the disc in heavy rotation.

Slow Magic might just enjoy a similar curiosity induced bump, but it’s more likely the album’s infectious beats and clever use of vocal samples that will have them hopping borders. There’s no mystery to Slow Magic; the music is intended to reach as many people as possible without the impediments of language or geography as imposed by identity. Plus that multicoloured wolf mask looks really cool onstage.