“Man is least himself when he talks in his own person. Give him a mask, and he will tell you the truth.” — Oscar Wilde

There’s a definite guilty pleasure in meeting Slow Magic without the techno-tribal mask. It makes an immediate impression, that glowing coyote visage. And it may seem like a gimmick until you see him casually saunter around the venue without it, moving through the crowd, then putting it on and taking the stage and transforming into a wild, charismatic entity. It’s not unlike a comic book, this disparity between the secret identity and the public figure. The mask is permission, license, freedom. And judging from the enthusiasm of the crowd (and the array of merch flying off the table), it’s also a potent and iconic brand.

Friendly, soft-spoken, and eager to talk about music he enjoys, the man behind How To Run Away sat down with Quip in the bar area of Portland, Oregon, at club Holocene less than an hour before doors opened to discuss life on tour, music he enjoys, and the influences on the new album. 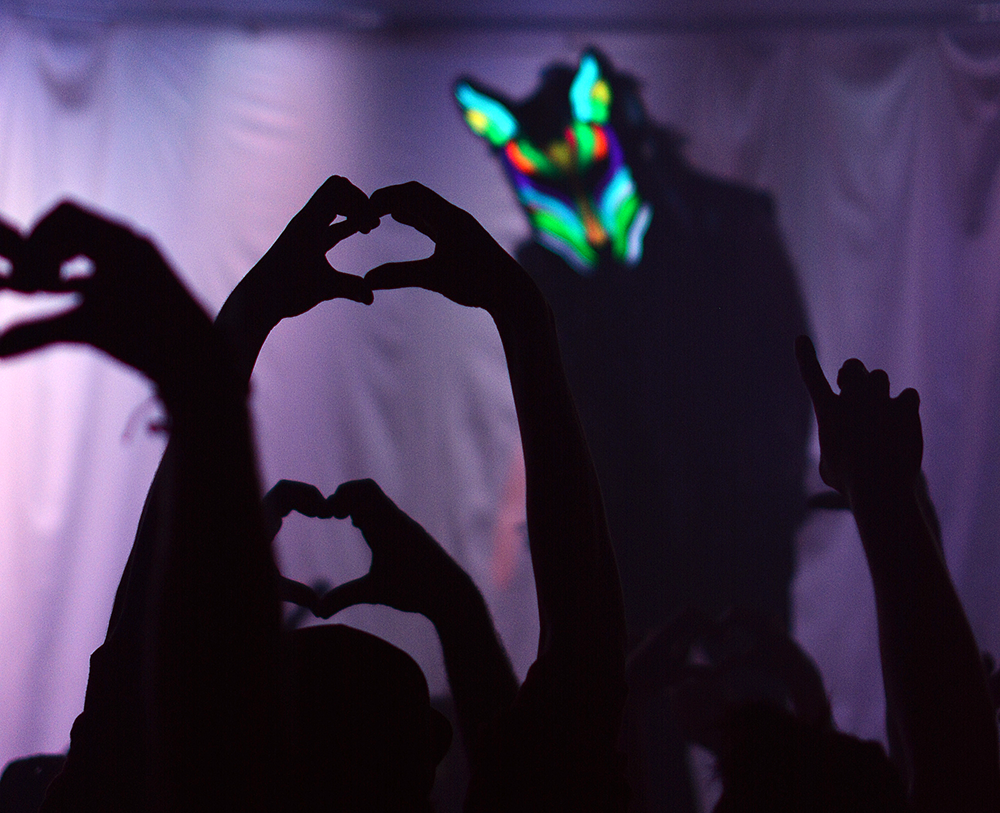 Eric Evans: Have you been to Portland before?

Slow Magic: I’ve been to Portland, I’ve played a few times. Last time was at the Crystal Ballroom with Emancipator. This [Holocene] is a pretty cool venue, one of the cooler venues I’ve ever walked into. I’m excited to see how the show goes.

EE: When you get to a new town do you have enough time to see anything, do anything?

SM: Not usually. We had two days off so we stayed a little out of town on a nice property. It’s been nice to come into town, get coffee, look around… there’s a lot of cool stuff here.

EE: So the mask. There’s a kind of tradition of electronic musicians who don’t openly reveal their identities because they want the music to speak for itself: Art of Noise, The KLF, Enigma, Daft Punk…

SM: Yeah. Obviously I’m not the first but the way the project started was to hide an identity and have the music be on the forefront. After I made music and put it online, with my first opportunity to play a show I went to a friend and he made the mask. He’s a brilliant painter and artist, Jonas McCluggage.

EE: OK, about How To Run Away. There are two fairly distinct types of songs on the album: loop-based galloping-rhythm tracks like “Girls” and “Bear Dance” and these keyboard-heavy funk riffs. Did that happen organically, or…?

SM: There are a lot of elements. There’s a lot of different kinds of music I enjoyed growing up that I just try to replicate, I guess. The drums was my main instrument growing up, and then keyboard too, so I guess that’s just naturally what’s recorded through me, through the computer and various instruments. EE: Are you a Prince fan?

EE: That’s the era I hear in How To Run Away, hints of that. Those heavy funk riffs.

SM: I love a lot of funk and jazz, early synthesizer stuff. And recent—[Crash of buckets of ice being dumped into cooler by bar]—(Laughs) …hopefully you get some audio out of this. (Laughs again)

EE: Not to diss other electronic dance acts but your stuff is more musicianly than a lot of what’s out there.

SM: Yeah. I enjoy music that’s made more abrasively for the purpose of dance—the trends, whatever it is that makes people dance in a certain decade—but I take that as a compliment. There’s no easy way to say it but I like keeping the music as a part of the music. It’s fun to try and mix the two. Ultimately, I like when everyone’s dancing at the show.

EE: You get that a lot, I imagine.

SM: Yeah, yeah. For me, that’s when I think it’s a good show, when everyone’s all in the same room, moving.

EE: Have you found that some cities are more receptive or less receptive to what you do?

SM: Yeah, I’ve done a few tours in the U.S. This tour started on the west coast in San Francisco, down the coast, across the south, up the east coast to Montreal, Toronto… Finishing in Victoria, Vancouver, then Seattle. There’s a few cities that are always inviting. Like, Boise, Idaho is always a good place to go. Cool crowd, a lot of young people that are just making, and hanging out around, really good music. Everywhere is kind of a surprise, there are always expectations but it’s always different than you expect.

EE: Would you talk about your support acts on this tour?

SM: Oh yeah. The first guy, Daktyl, he’s from the UK. Second is Kodak To Graph, from Florida. Musically it’s been a really good fit, a lot of fun. We’re nearing the end of the tour and it’s been fun hearing their sets every night.

EE: Did you do any record shopping while you were in town?

SM: A little bit, actually. I just played a little stripped-down set at [Portland record store] Music Millennium, one drum. It was a secret but fun thing. It’s hard for me because I really like vinyl and it doesn’t transport easily on tour. The last vinyl I got was Port St. Willow. I think it’s one guy and he has a really good voice, a really beautiful voice. Oh, I did get the new Flying Lotus. A friend got me the CD because they knew it was hard to travel with vinyl. We’ve been listening to that in the car.

SM: Yeah, I do. I think everything Flying Lotus does is really good. I like the jazz on the new album, it brings me back to studying jazz in school. I really, really like it. Some songs are not electronic at all, just jazz. Full-on instruments.

EE: Herbie Hancock is on that record.

SM:Yeah, and a lot of really good drummers. It’s cool.

EE: Are you familiar with any Portland bands?

SM: Yeah. There’s one producer/electronic musician I really like called EASTGHOST, I just found out he’s from Portland today. He’s new, really really good. Someone tweeted “Hey, you should meet up with him.” I’ve always liked bands from the Pacific northwest. I just got this [local label Tender Loving Empire] compilation Friends and Friends of Friends. That’s good stuff, really good stuff. I really like Shy Girls, I’d love to do a song with him, his voice is amazing. I hope I can do a song with him.