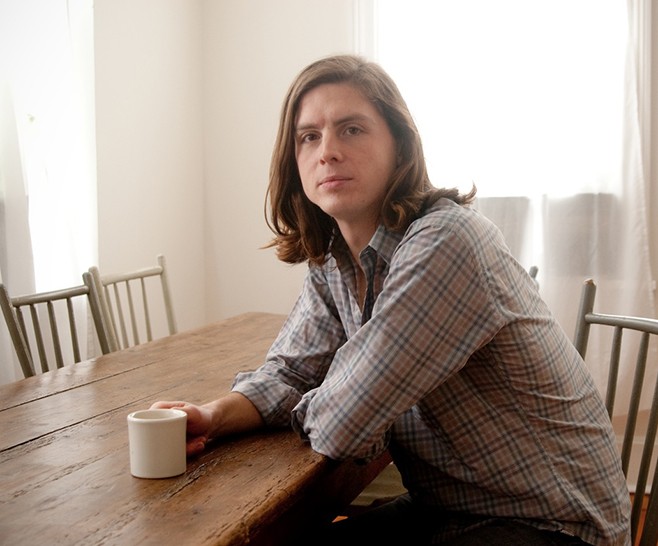 Erik Hall calls his musical project “In Tall Buildings” because he records much of his music in high rises. However, his sophomore album, Driver, was dually recorded in rural Michigan and his home studio. The expansiveness of the sound comes from being in a rural atmosphere while the intimacy and the ability of the listeners to interpret the sound into their own comes from the city.  It’s truly a beautiful amalgamation of two ideas.

Hall is a Chicagoan, and in true form, he played to a packed house at Schubas. This show was four years in the making. Hall is a very dedicated musician, which is not only obvious in his meticulousness in creating his album, but also his ability to recreate his recordings on stage. He used two microphones that helped to create a dreamy, lo-fi sound that happens when recording an album in a bedroom (or high rise). Hall is an enthusiastic home recorder. He’s sonically obsessed and wants to manipulate sound. Which, in part, has turned him into a gear head. This is great news for fans because this means his music will only become more intricate and rich as he discovers new ways to ply it.

When Hall and his band mates took the stage, I noticed they almost exclusively had the same hair cut and they dressed alike. It’s as if they were some sort of tribe or cult paying homage to the phonic gods. The show was sprawling and yet concise at the same time. Many of the songs slipped into one another and the crowd was free to follow closely or come and go as they pleased. Hall’s voice also reminded me of a hybrid between a toned down Neil Young and Beck.

In Tall Buildings’ music has many unusual pairings; compact and unsuppressed, rural and urban, jubilant and melancholy. This allows him to appeal to many audiences and will also hopefully help him find a place in the crown molding of great Chicago music.