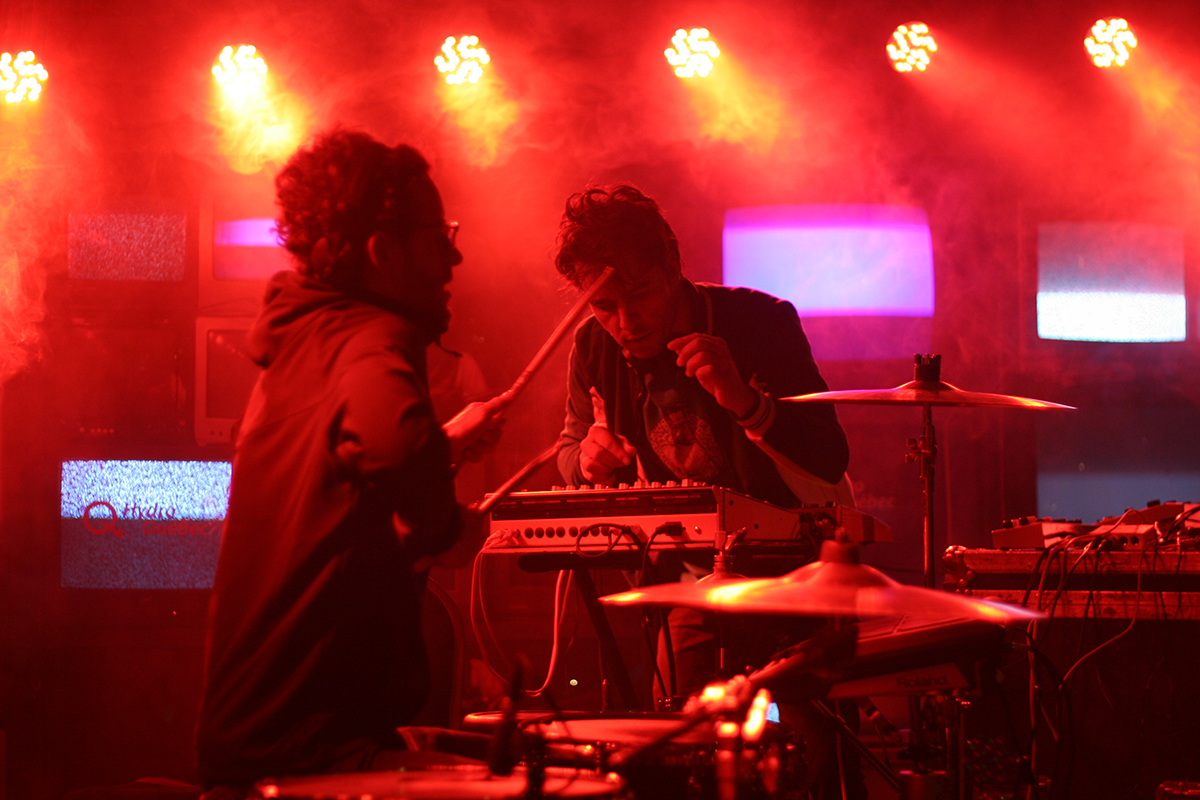 Over the years FME has established itself as a prominent music festival that very few know about. This ‘underground’ festival brings together industry folks from across North America and Europe, in addition (of course) to the Québécois who take planes, trains, and automobiles to join in on the festivities.

This year marks Canada’s 150 anniversary so FME chose the season’s theme as the Spirit: celebrating the indigenous roots, local talent, and emerging musicians from abroad.

An annual tradition at FME is the Bonsound pool party which takes place in a house on the lake, just outside of the Rouyn-Noranda downtown. As the industry folks gathered, standing in the sunny pockets of the yard and sipping on Boréale beer, Duchess Says were setting up by the pool. The band played a show last night and the hype from that set was still spreading across the crowd. We were in for a treat and seriously considering taking bets on whether or not Annie-Claude Deschênes will drop into the pool during the set. Some call Duchess Says punk, but they call themselves moog rock. What really makes the band worth seeing, however, is Deschênes theatrical performance. The band opened with “Negative Thoughts,” seemingly a favourite to many and a good portion of the crowd knew lyrics word-for-word for most songs. Deschênes immediately took on her stage persona, working the crowd, touching people’s faces, throwing red berries into the audience, sharing wine, and pulling stranger’s hair. This set was undoubtedly a memorable one. 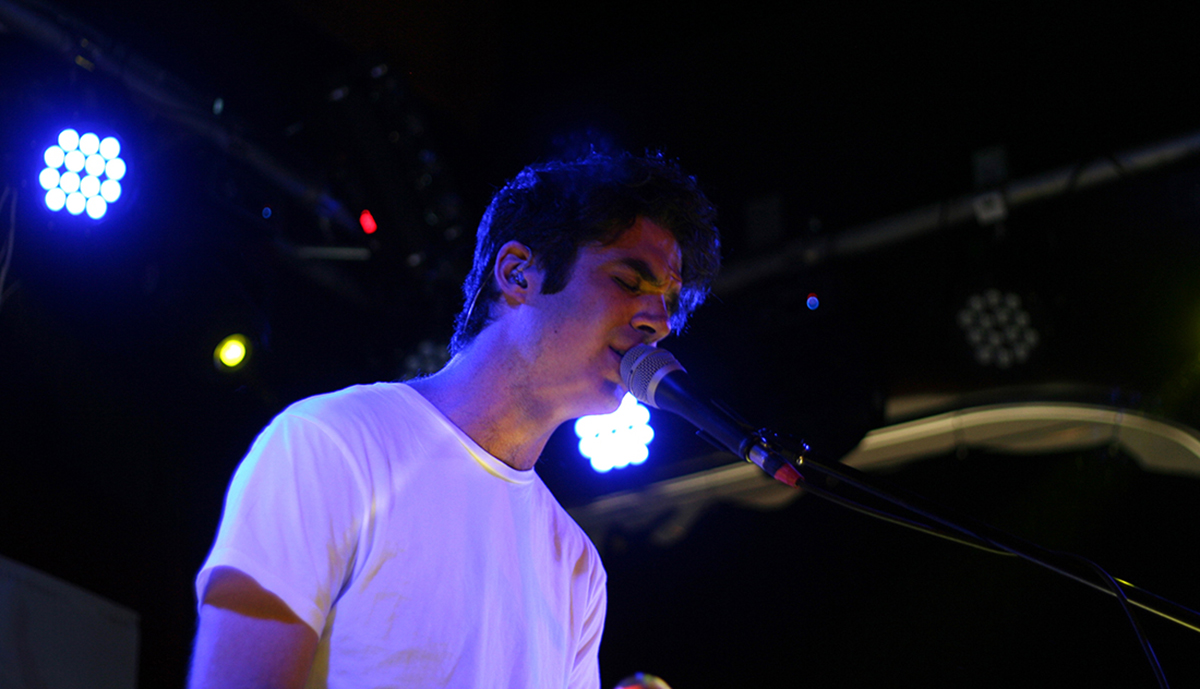 Montreal-based singer-songwriter and multi-instrumentalist Geoffroy took the stage for an early set at Scène Évolu-Son later that day. Having recently release his debut album Coastline via Bonsound, Geoffroy has been gaining attention globally. The album featured a mix of percussions, guitars, analog keyboards and synths, and woodwind instruments, some of those made it out to the show. Dimly lit by single colour light streams he worked through the album leaving the best to the end. Being an up-and-coming artist, however, he seemed a bit startled by the size of crowd. During the second half of the show he admitted he was only expecting 30 people while the room he was performing in was filled floor to balcony back to back, a pleasant surprise no doubt.

On a much heavier note and in high anticipation Brooklyn’s A Place to Bury Strangers took the bigger stage at Le Petit Théâtre du Vieux Noranda later that night. Riding a fine line of psychedelic and experimental rock APTBS deffinitly know how to host an impressive show. The stage was lit by multi-coloured directional lights only leaving room for moving shadows. Dion Lunadon (bass) primarily stayed in the same spot, leading the vocals, while Oliver Ackermann (guitar and vocals) was cruising the stage and breaking guitars (3 in total, but I might be wrong). The whole thing felt like The Crow meets the season finale episode of Stranger Things when shit really goes South, and it was awesome. 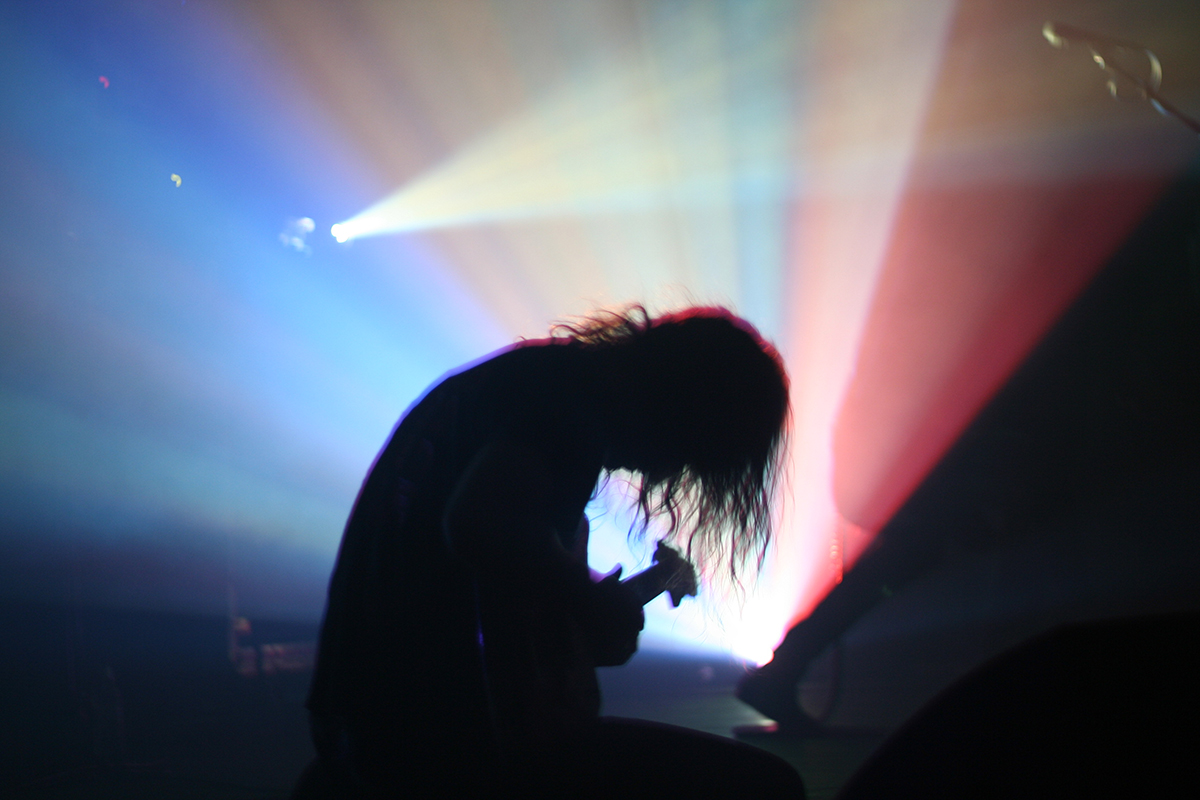 It’s hard to pin point a highlight from a full weekend of shows but one often finds its way to the top. This weekend, the show that was the biggest surprise and best discovery is AeroBrasil, an electronic duo from Paris with Sidoine on drums and Vincent on electronics.

One of the outdoor stages at FME historically has been a corner of two walls built from old televisions top to bottom, a site to remember as is. AeroBrasil set up their drum set and equipment there earlier in the day but did not go on till shortly after 11 on Friday. The background music stopped, the lights lit up, Sidoine hopped up on stage and begun vigorously beating at the drums. As in many instances, the sound is much more impressive live, the volume and spread of it takes you in. Their music is hard to describe, it is a mix of electronic and instrumental, drawing on retro European sound (see N. Sokolov “Safari”) and new age electronic; sometimes it reminds you of Soulwax and other times of early Air. The band is quite new and only have a self-titled EP out but have already been around Europe and made some solid impressions. Looking forward to what comes from them next. 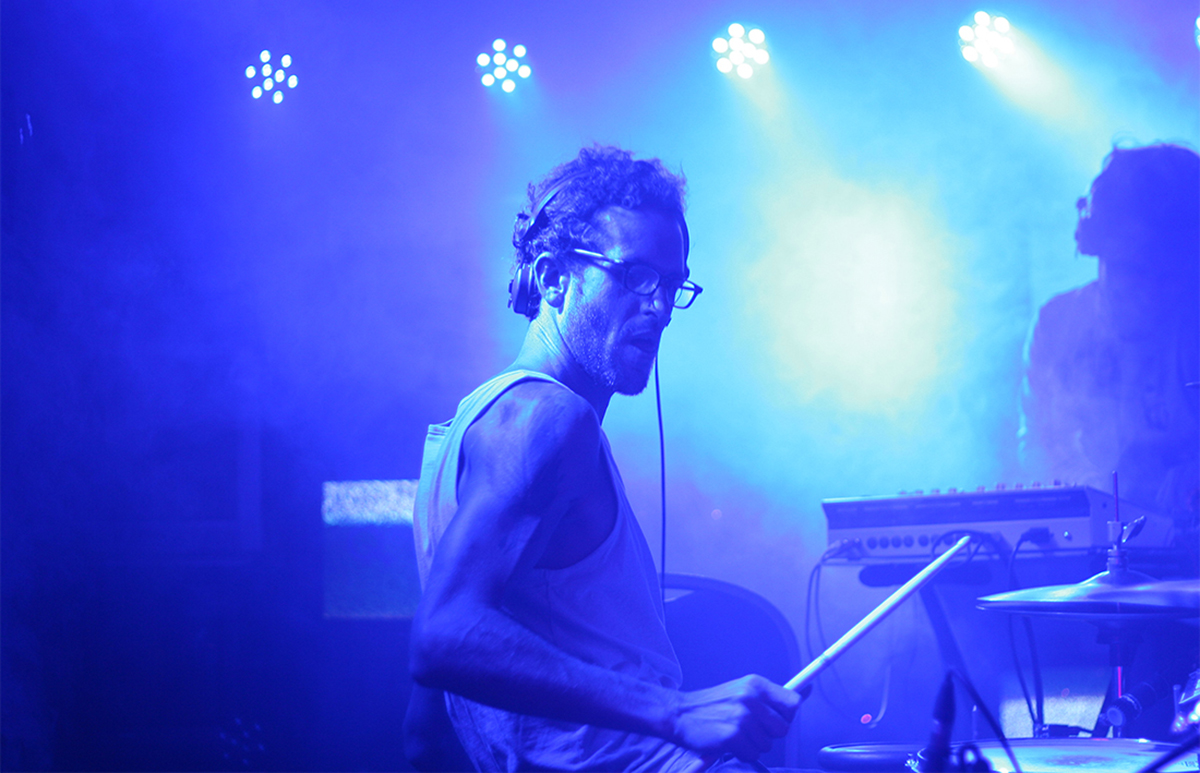 As the weekend went on the themes kept on changing. Sunday afternoon was highlighted by performances from Kroy and Mat Vezio, both musicians relying heavily on their voices. Kroy is Camille Poliquin, you may know her as one hand of Milk & Bone. Her debut album Scavenger was in many ways a self-discovery, the sound is a mix synth-pop melodies and lullaby trip-hop. Her inspired melancholy comes through quite clearly in the life performance as well. Joined on stage by two other musicians she gently rocked from side to side while playing keys and letting her soft yet assured voice fill the room and the neighbourhood.

Mat Vezio is a drummer to a few Quebec performers (Louis-Philippe Gingras, Dany Placard, Francis Faubert) but his solo act is all about voice and guitar. Joined by two backup singers his intimate set at a cafe down the street was a pleasant afternoon delight. It’s the kind of music you can sleep under a tree to or recover from heartbreak, which is likely how Vezio wrote his debut EP Before the Death of the Picked Flowers (Avant la mort des fleurs cueillies).

A switch to world music was made on Saturday afternoon with a performance by Afrikana Soul Sister, a quartet of multi-skilled musicians, lead by Djely Tapa, who make organic-electro-afro-house (have a listen to “M”). Their performance is upbeat and engaging, with band members dancing, swapping drums and spreading their contagious energy with smiles and positive vibes. Afrikana Soul Sister was a free show and drew out families and recovering concert goers out on the street (Friday was a rough night for many), bopping and dancing in the hot hot heat, the one time sun truly came through this weekend. 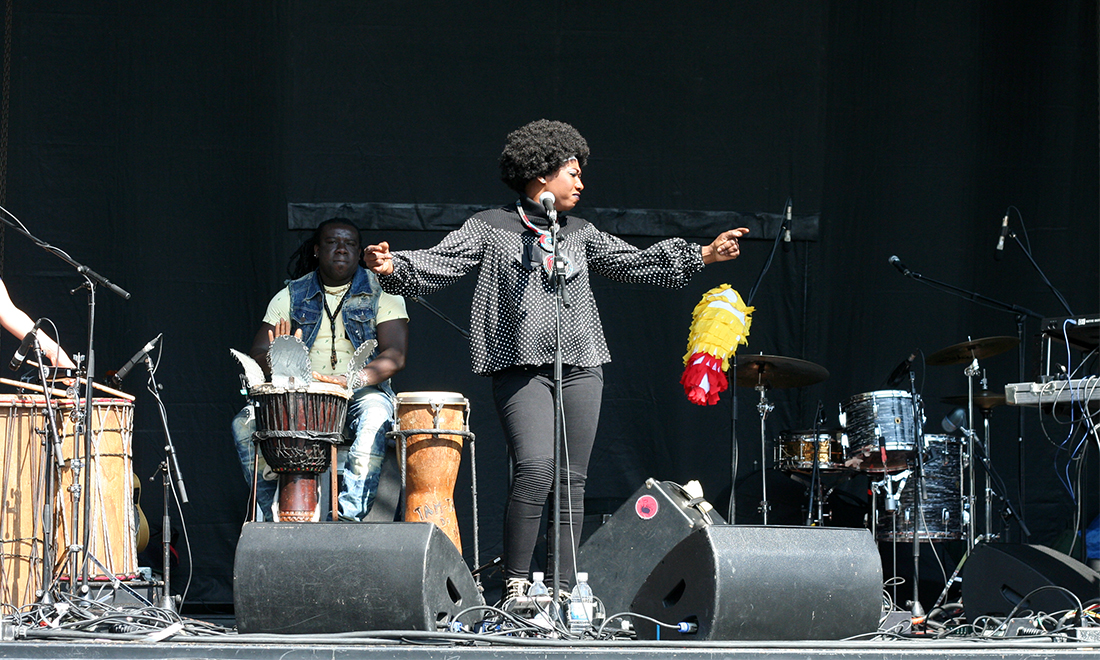 The weekend wrapped up with a set of performances on the outdoor stage, floating at the foot of lake Kiwanis. The chilly evening and floating stage was a suiting atmosphere for Klô Pelgag (Chloé Pelletier-Gagnon), a Canadian singer-songwriter from Quebec. Pelgag came up in Quebec by performing in various contests, has been nominated, and won, handful of emerging artist and writer awards. To her fans she is also know for her artistic oddity: the quirky costumes, the eccentric dance moves, the weird music videos. Pelgag’s performance on the stage was augmented by an orchestra while she floated at the centre of it, wearing a loosely shaped oversized red sweater coat.

A few other club performances took place on Sunday night but as the weekend was wearing out and the energies dwindled the evening was mostly a welcome break to bond with newly acquired friends, have drinks, and make plans for post-FME.