Ice Cube, No Doubt, and Motörhead headlined on Friday night, at the same time, on different stages; this of course posed a scheduling conundrum for festivalgoers who are fans of all three. But to those who have a penchant for legendary hip hop, Ice Cube was the obvious choice. With the recent box office success of the NWA biopic, Riot Fest was the perfect time and place for Ice Cube to remind fans of why they love the Compton-bred MC-turned-actor. During his 75-minute set, which featured guest appearances from WC, DJ Yella, MC Ren, and O’Shea Jackson, Jr., as well as visual video backgrounds, Cube and company never missed a beat.

As the crowd swelled well into the thousands, fans old and new rapped along to the music that not only carved out NWA’s career, but gave outsiders a peak into the lives they lived growing up in Compton. Cube opened the show with “Natural Born Killaz”, “Why We Thugs”, and “Check Yo Self” before being joined onstage by original NWA members, DJ Yella and MC Ren, and his son, O’Shea, Jr. They blazed through “Chin Check”, “Straight Outta Compton” and “Gangsta Gangsta”, songs that told many stories, including stories of police brutality and gang violence. As a prelude to the once controversial “Fuck Tha Police”, Ice Cube made it clear that the song wasn’t meant for the good cops. The crowd rapped along, with every word, as if they too had experienced what NWA had lived through.

After the NWA reunion, Cube, with WC by his side, continued the show with some of his greatest hits, “You Can Do It”, “Go To Church”, and the Westside Connection tune, “Gangsta Nation”. Cube closed the set with the timeless “It Was A Good Day”, in its entirety. Overall, Ice Cube not only stole the show, but he stole the entire first day of Riot Fest. 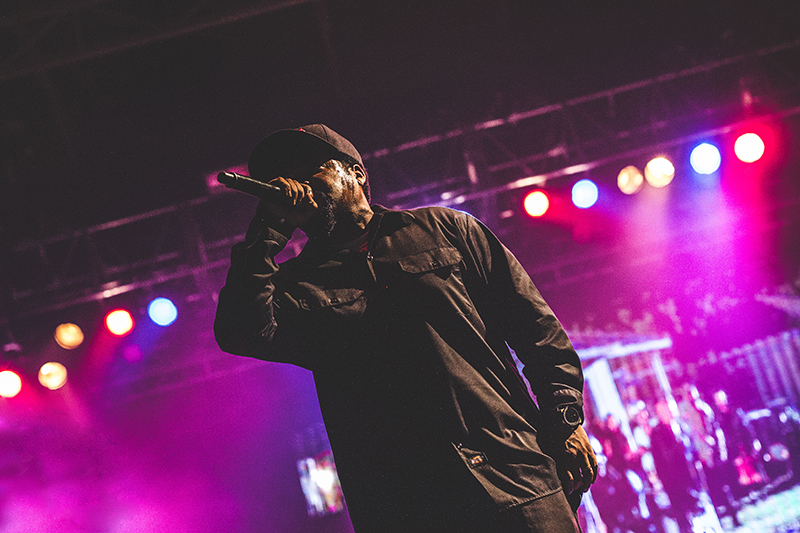