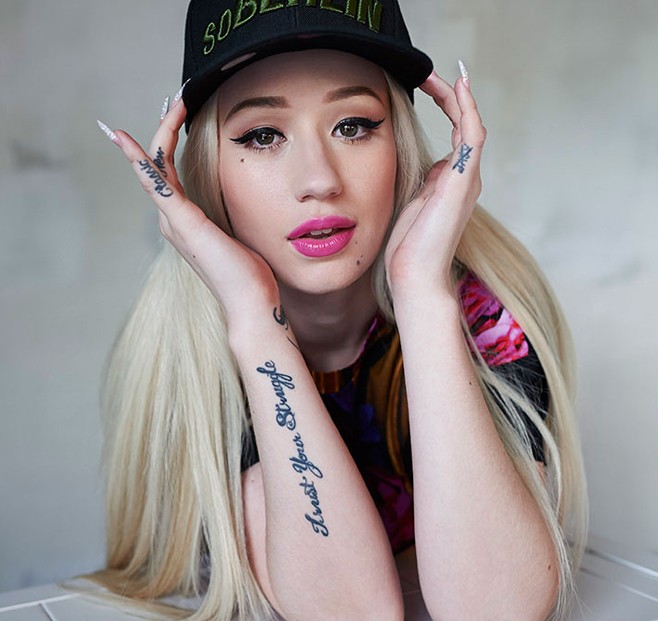 The struggle is real for white rappers and the narrative is forming around how hard it is for them to break into the hip hop scene. Struggle is a common thread in hip hop, you wouldn’t have the boastfulness of Jay-Z if it wasn’t for the struggle with selling dope that helped him dominate the game; Straight Outta Compton (N.W.A.) exploded on the scene because it was visceral and real; Kendrick Lamar’s successful mixtape Section.80 was a concept album detailing the socioeconomic conditions of living in slums. Even eventual commercially successful indie rap artist Macklemore has the “first successful independent release to make it to the top of iTunes…” story to accompany his game.

Iggy Azalea, a white female rapper, has already entertained the questions of how being white has made it harder for her to break into the scene, how being a female has led to violations at her concerts, and the inevitable talk about her “ass game”. She has latched onto race as her compelling narrative. Inside of her music, her lyrics mention (and in some cases pay homage to; “Fancy” begins with what has to be a reference to Nicki Minaj’s shocking opening verse on “Monster”) how difficult it has been to be white. Her answers to criticism are often times post-racial color blind phrases: “The narrative that I can tell, is not the narrative that someone like Angel Haze can, and I would never try to. I can do a video parodying Clueless and she can’t.” Angel Haze, a friend according to Azalea, has released a mixtape where she discusses being sexually abused as a child over Eminem’s “Cleanin’ Out My Closet.”

“First things first, I’m the realest”, Iggy begins on “Fancy” in the call and response defensiveness that pervades hip hop. She has to signify that she’s not just a novelty as a white female rapper, she feels the need to defend her own perceived status as a minority within hip hop. We need the struggle and we need to be reminded that her struggle isn’t to be dismissed for her art to be more than mainstream. Focusing on the race issue though positions Iggy in a comparative position, her struggle must be held up against what she’s struggling against (“still stunting how you love that/got the whole world asking how I does that”) and what she’s struggling against is that a minority dominated genre is having difficulty accepting her.

This becomes her most common theme; space needs to be made so that more white rappers can successfully infiltrate the scene. It’s too hard for them right now. What Iggy doesn’t understand is that her race makes her more marketable and more palatable, her success is easier, not harder, because the target audience (what brings in money) is not hip hop purists who are going to bristle at her race, but the suburban kids who fuel consumption.

It’s hard to get a sense of what Iggy’s actual struggle to be successful was and whether that did include struggles with poverty, sexual abuse or situations beyond her control. The closest intimacy that’s given is the repeated lyrics “no money, no family/sixteen in the middle of Miami”, an allusion made in both “Don’t Need Y’all” and “Work” (quite possibly the most genuine song on The New Classic.) She scrubbed floors, worked three jobs to pay for a plane ticket to fly to Miami at the age of 16 after failing out of her schooling and when working on her albums had to sleep in the studio. This is the compelling struggle, not the allusions to how difficult the game is. Her attitude is rubbing against critics who will either never accept her narrative as compelling because she isn’t black or will only accept it when she stops pretending like being white made it hard for her to tell her story.

Iggy Azalea is talented though, and much of the criticism is leveled at the shame that her talent can’t be directed in a more socially conscientious fashion. Her music videos are filled with excellent examples of how it’s a struggle for females to make money, to achieve success, are filled with objectification and sexually compromising positions. Amanda Blank’s work with Spank Rock (and her lone solo album) are excellent examples of positive female charged sexuality, employed in a way that empowers females rather than continues the trope of objectification. Iggy Azalea should not need to answer questions, somewhat uncomfortably, about how her “ass game” has helped to soothe critics who don’t think she can be in rap or about her bedroom style and where she falls on the porn star spectrum.

Iggy Azalea clearly has promise with her heaps of talent. The problem of comparing narratives won’t prevent her from achieving sales or from people talking about how good she is or what she’s proving. It will make some listeners bristle, relegate her to the “guilty pleasure” pile of their music collection or turn them off completely because she reminds them of their own immaturity. After listening to her latest album The New Classic, I should not want to use the word “swag” ironically.