Echoing between the bracelets of the Lightning in a Bottle (LIB) commonwealth. It’s been a rough two years for us all and in turn, the cathartic release from LIB festival is one to cherish for years on end. The mornings were tranquil, the nights were spiritual; rhythmic stomping assembled dust storms across Buena Vista Lake. There are no laws, but everyone is chill. For five days, Bass is God.

Which is a bit misleading. Yoga lessons were soft and ambient, near-silent if not for the mentor’s melodic instructions. Further down the way stood the Grand Antique, a portal resembling an old saloon town wherein Smooth Hound Smith crooned into the soft evening glow. In limbo between each stage is a probability – some totems for sale, a crew of snazzy fits, perhaps a few steampunk dancers professing atop an ice cream truck. Look hard enough and find the drunk sloth grooving with vague rhythm under a quaint unassuming marquee:

“THE BUTTHOLE CHAKRA WORKSHOP HAS BEEN CANCELED” 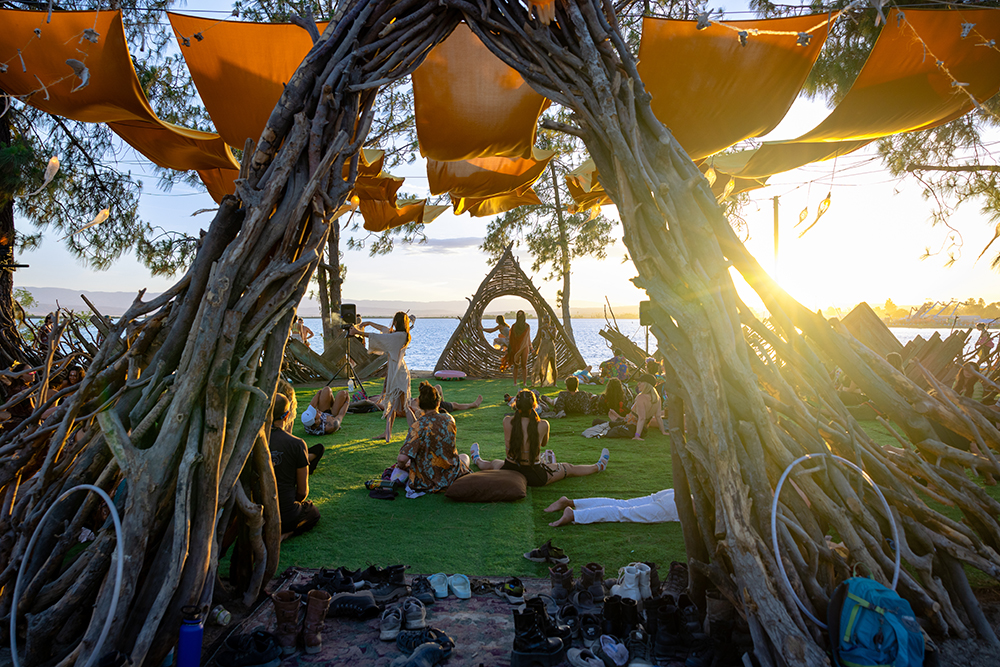 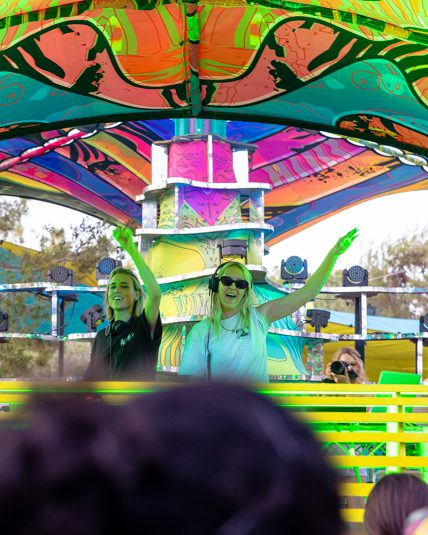 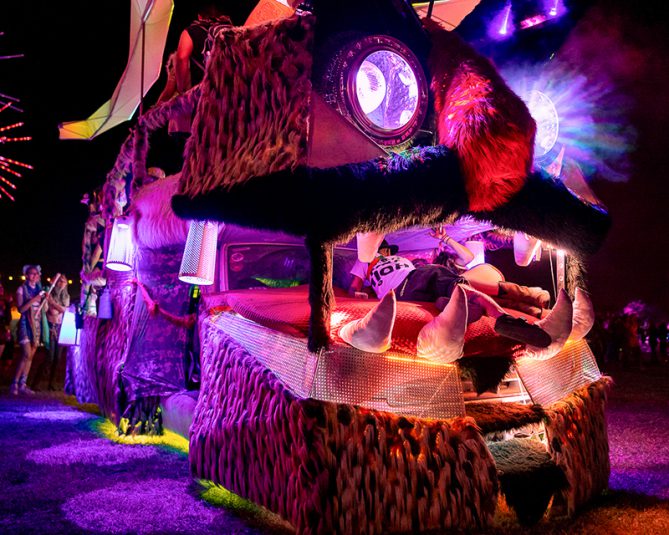 G Jones is an earthquake. His monochrome B2B set with Eprom was relentless, a titanic adventure that graced the crowd their latest collab effort “Acid Disk 2”. The late SOPHIE made a soft appearance through their remixes, which was particularly compassionate. It felt warm to have her presence if only for a moment. Glass Animals were just a stone’s throw away over at Lightning stage, a completely different vibe for a just as passionate crowd. They set a precedent on Friday that upcoming headliners would have to claw to come close to.

But Kaytranada was freshly sharpened. “10%” hits different in a crowd of thousands bouncing the inquisitive chorus across themselves. He opened the set with finger drumming and sliced chops before a smooth flip into the radio bumps. Successively, Big Wild relied perhaps too much on the radio hits – to the detriment of none. Having the bar located directly at the sonic apex of the Lightning stage is a strategy for the books. 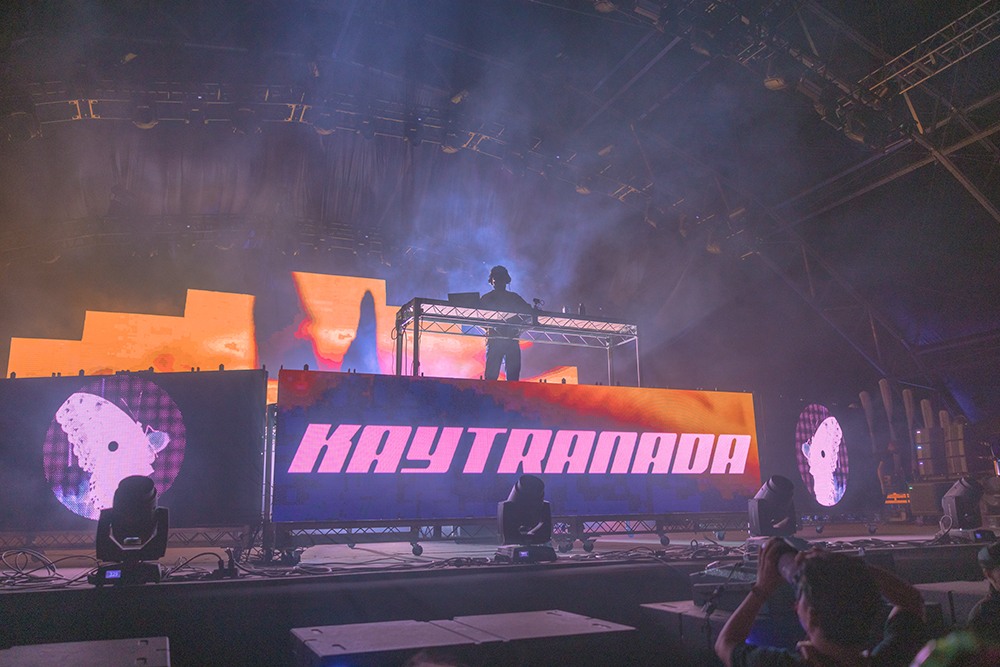 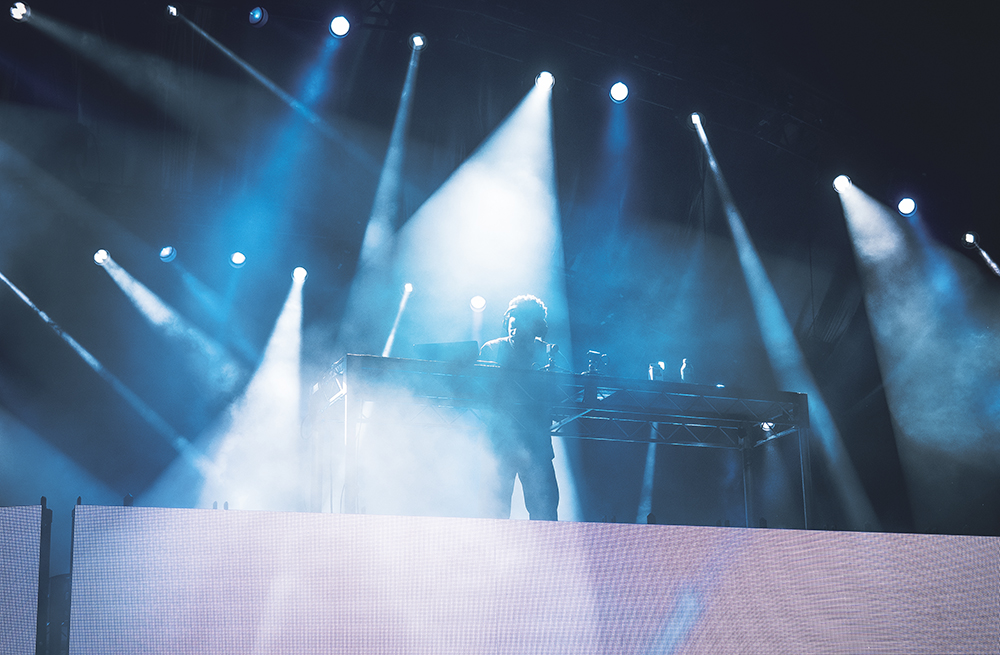 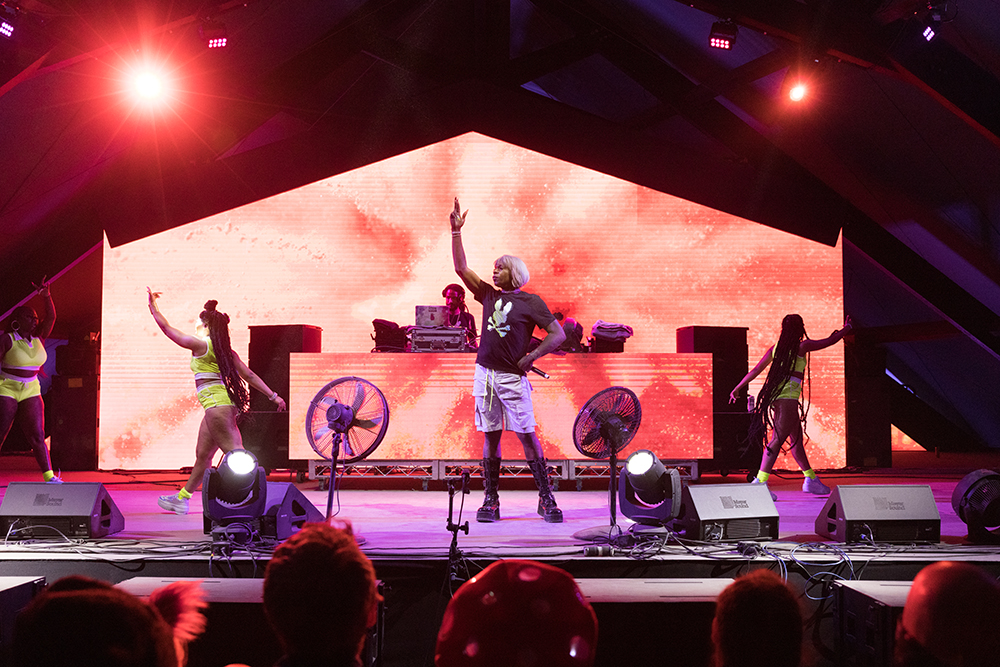 Thunder stage was completely under the service of Big Freedia and no one was the same. Her accomplices twerked through space and time and dead-dropped into the stage like meteors ad nauseum. We crawled out in shambles. Exhausted, I turned to a friend and point out an apparent schedule error. Some act named “Burning Desire” holds a headline spot, for just ten minutes? Before Purity Ring? Yeah, alright. When suddenly:

Ignited swords and daggers dance across the stage. Troupe leader smirks, with her own fiery armaments, directing acrobats like a puppet-master committing arson by proxy. The fire-dancers clashed their weapons together and sparks fly; the crowd howls, hypnotized. You could feel the flame from the outskirts of the front row. Daggers split in five directions and the dancers spin and pose with the entire stage ablaze. Ten minutes felt like nothing, I ate my words. 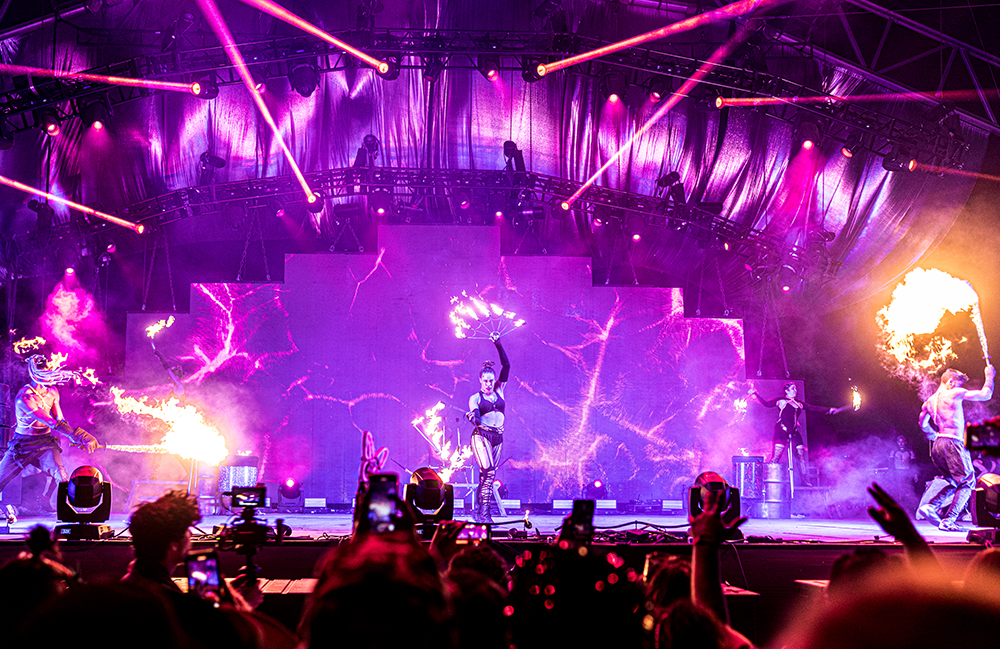 Purity Ring’s intricate stage setup proved to be turbulent with the quick turnaround between acts, but when the ball was rolling it slammed. Megan is a seraph, decked in a gorgeous flowing outfit that evolved with the wind. Behind her is a throne of smoke and lights where Corin can comfortably play his midi ornaments. In true synthpop fashion, her delicate vocals illustrated cryptic images. Their live rendition of “Lofticries” was a smooth lull in a night full of stimulus:

“Let it seep through your sockets and ears
Into your precious ruptured skull
Let it seep, keep you from us
Patiently heal you” 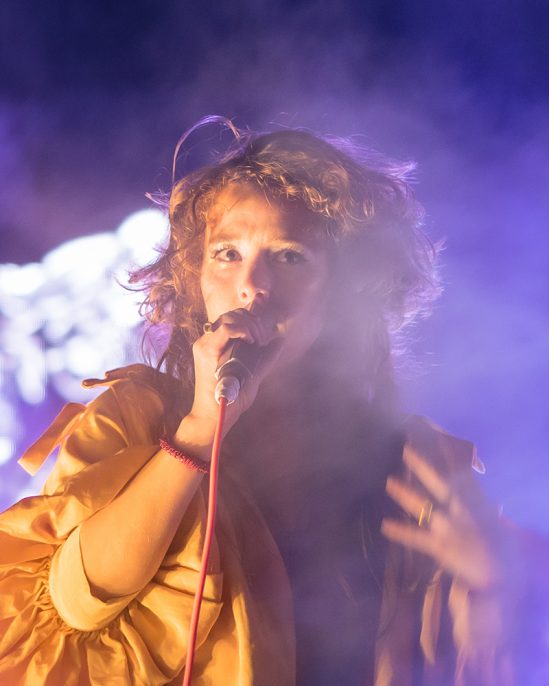 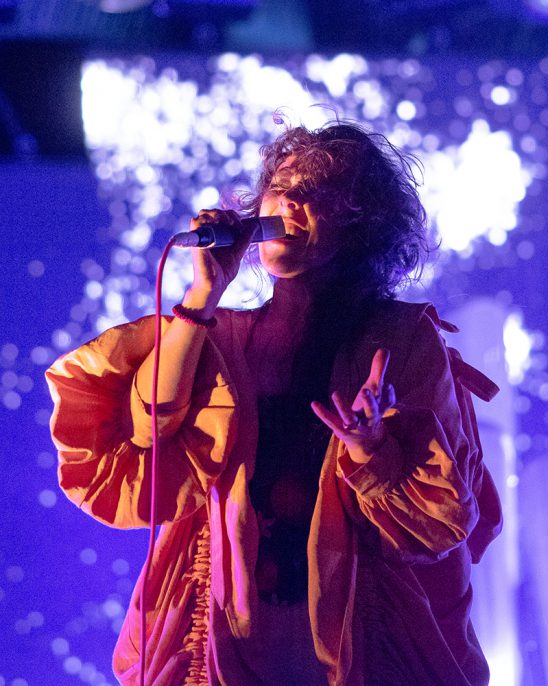 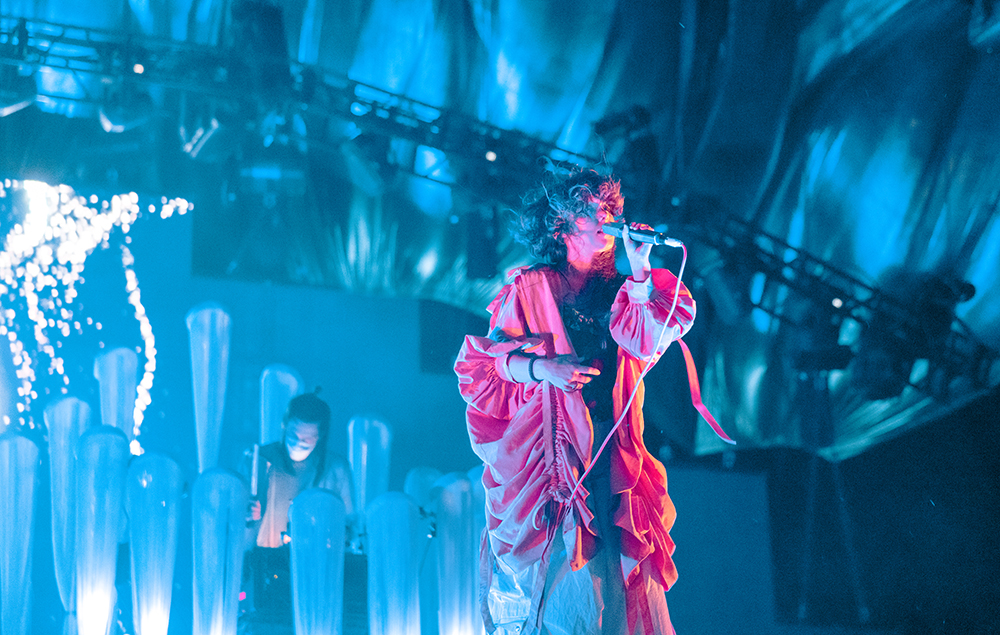 Nestled between Grand Antique and the north side of the lake sits The Stacks, a bass hive for smaller electronic artists to flex their tech. I’d heard of Templo years ago through the vines but to catch his breakbeat abrasions live was something else entirely. The entire stage was drenched in 100hz, a low-frequency flood much to the delight of the community. Folks were dancing in makeshift towers that loomed into the sky. Blessed vibes in all directions.

SAKA is another indie artist to put on the fridge. Unreal halftime and riddim artillery forged a symbiotic relationship with the crowd. The harder they went, the heavier he sent it. Later that night at Woogie stage, his track “Shaolin” would be deployed by Four Tet and desiccate the iridescent stage into pieces. The resulting interaction is so genuine it’ll melt your heart. 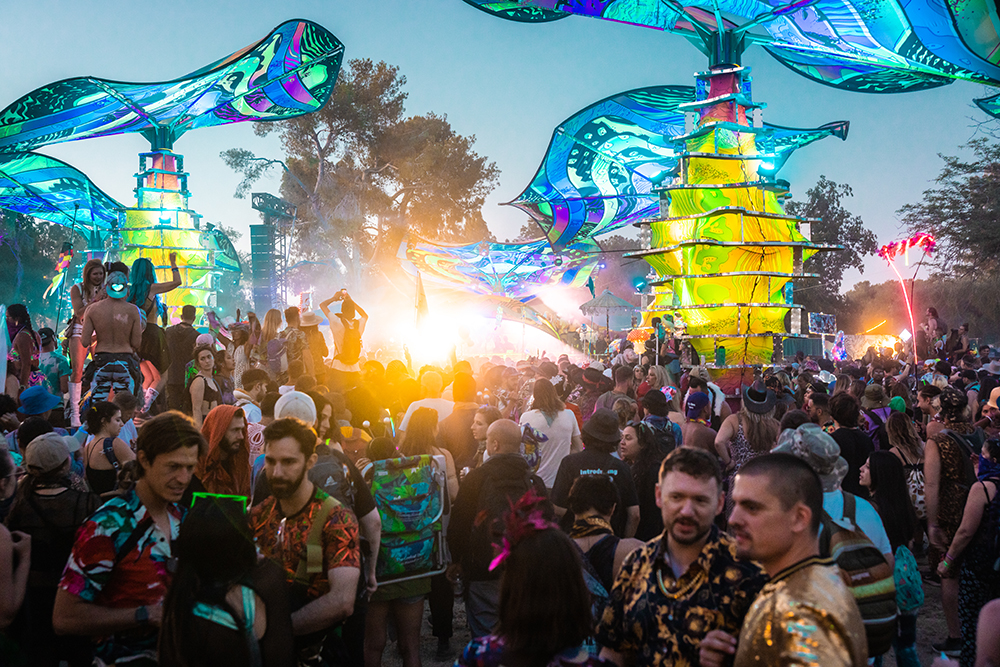 The lake was pristine during sunlight hours. Those who crashed out on scuttled floaties the night prior took to the sea to refresh, alive with the sound of vague bass from over yonder. It was a safe haven for those receding the wind and dust from the campsites. Meeting people has never been so easy, the wavelength that people were tuned into was warm and welcoming. As it should be. We were implored to interact and meet, ask for help, directions, and hugs.

This year that sneaky lightning was finally captured in that gosh dang bottle. We talked to a doctor/nurse duo who commented that this event was their light at the end of the tunnel. What a light it was.

In no uncertain terms, it was a celebration of humanity. A paracosm in which experience is paramount. The Do Lab went above and beyond to ensure a safe experience for all. The paths and locales were handicap accessible. Medic tents paired with Dancesafe ambassadors were emended and intermittent. An ambulance even responded to Megan James’ inquiries, as she briefly halted her performance to ensure the crowd was safe. I can’t imagine a better run festival, one to channel out our hearts from the cages locked from a uniquely arduous two years.

*Note: on Thursday evening it was disclosed that two medical incidents resulted in fatality over the weekend. Festival organizers are currently working with county officials and the families involved. Our hearts go out to their loved ones affected by this tragedy. 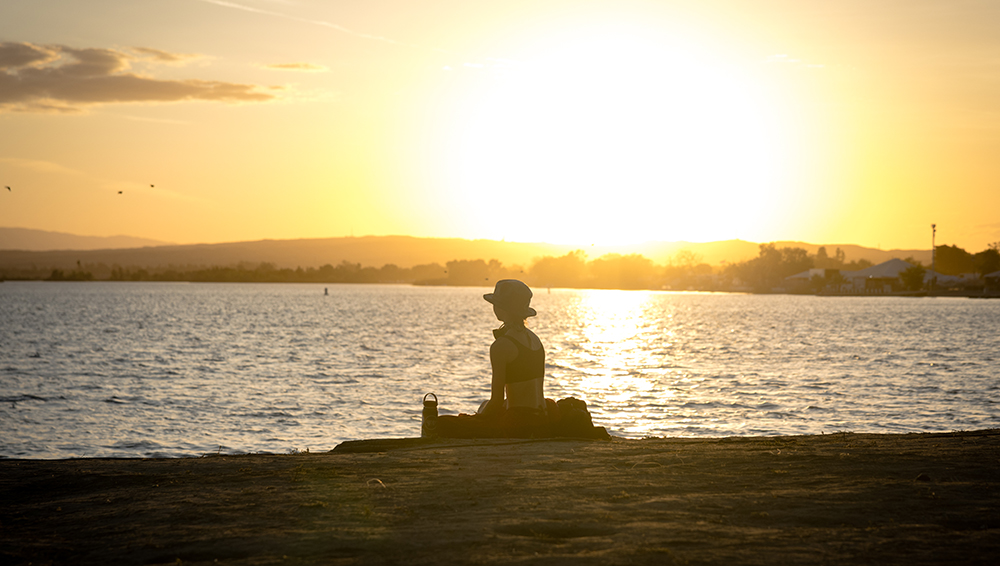