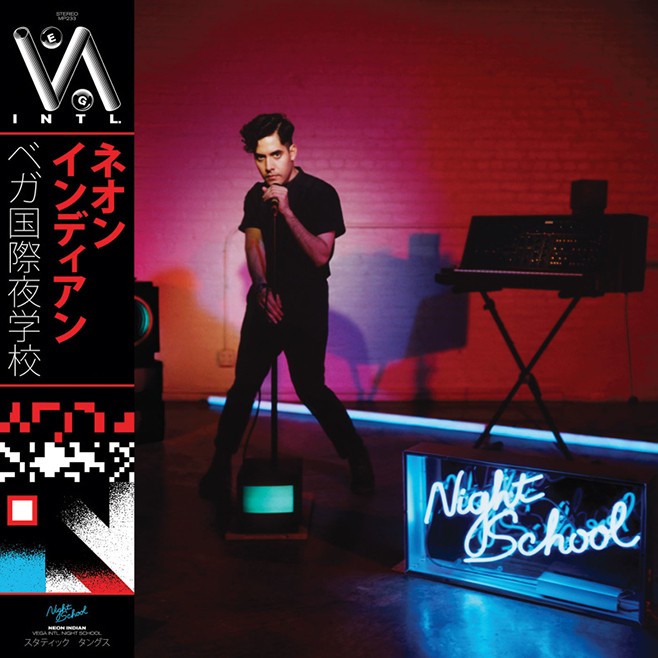 When one hears the name Neon Indian, the first instinct is an eye-roll at the extreme hipster irony involved. When one hears Neon Indian’s latest album, VEGA INTL. Night School however, there should be no eye-rolling whatsoever. Alan Palomo has not only lived up to the lofty expectations with his first release since Era Extraña in 2011, he has exceeded them with a collection of jams that will make the listener bob their head and move their feet.

The songs show an evolution for Neon Indian in their complexity of sonic layers, highlighted by the second track on the album, “Annie,” that features clean guitar riffs over a low-key reggae beat. There is a lot going on in the song, but Palomo manages to weave it all together and the result is a wrapped and ready “pop” song that is way too cool to be called as such.

Later, on “Smut!,” Palomo kicks it off with a synthesized beat that sounds straight off of Grateful Dead’s “Shakedown Street.” It would be hard to believe that something as produced as Neon Indian would draw inspiration from the original granola group, and yet there in the chorus he sings, “I’ll be fine til the shakedown.” The musical influences are strong with this one.

Occasionally the album gets caught between Palomo’s two worlds of dancefloor-filler and lo-fi songwriter, like on the interlude track, “Bozo,” which feels like a rough cut of a song that was thrown in for filler. Then it becomes clear that he was just using it as setup for the stellar next song, “The Glitzy Hive,” which could fill a dancefloor and sounds even cleaner thanks to the chaos preceding it.

The album gets its name from the artist’s experiences hanging out with friends after dark in their studios. He believes that is where he learned the most interesting things, in other words it was like he was attending “night school.” If this album is his final project in order to graduate, then give the man his damn degree already and get him on stage. Sounds like a helluva school.