Kid Millions is already known for his eclectic electronic beats. Listening to his solo work is like a nostalgic visit to early hip hop. “Victim to the Beat,” sounds like a better version of “Rapper’s Delight,” and each of his tracks carries that theme, improving on the original, early sound. Needless to say, his 100 Disciplines event, as a part of the Red Bull Music Academy Festival, was highly anticipated for the distortion laden, drum infused energy that it was promising to bring.

RBMA continued the mixing of loud and raucous with high brow by placing 100 Disciplines in the Brooklyn Museum. The interlude performer, Niños du Brasil, brought their glitchy bachata to a fairly empty crowd. Their music is constantly in motion, an undercurrent of shaking timber or metronome beat that fills your thoughts. They completed the more complex style of Kid Millions’ enveloping performance. 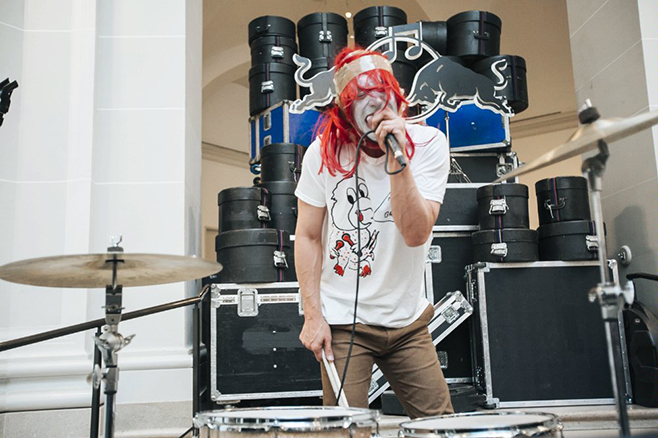 100 Disclipines used 20 drummers, a timpani, an electric keyboard, a violin and several other instruments to capture the narrative of Kid Millions’ time in New York City. He’s been pretty hush about the meaning behind the title, suggestive of the intricate way that musical pieces come together, and the discipline required to develop something so enveloping. The group of performers at the Brooklyn Museum were surrounded by audience members. They set up in the middle of the foyer in a neat little circle, their backs to some of the audience at all times, instruments and equipment creating a protective circle.

The event was unexpectedly nuanced. More than simply percussion developing a heart beat, Kid Millions allowed a story to unfold. 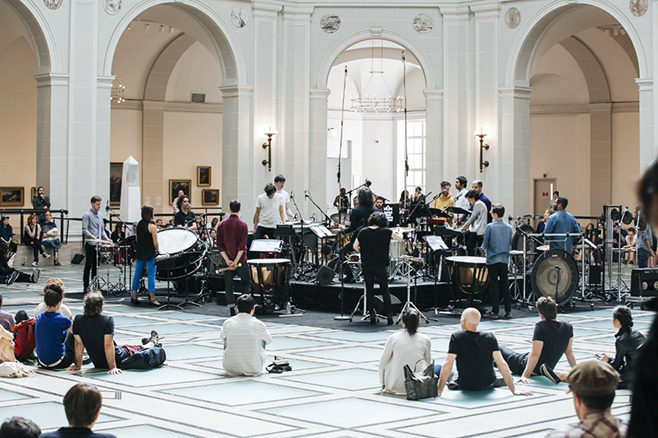