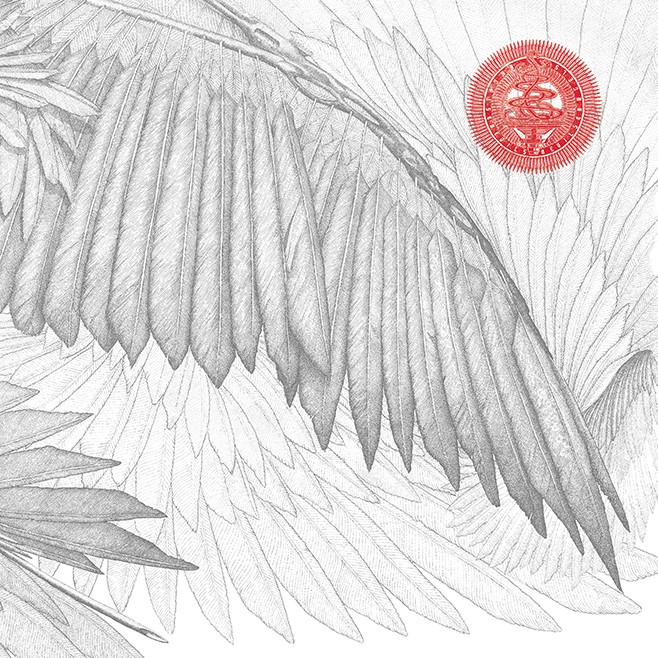 In the hotshot producer world there’s a lot of coattail riding, using famous musicians to bolster their own status until they become famous by association. But The Bug’s brain, Kevin Martin, isn’t the coattail riding type, even though he’s produced Beastie Boys, Grace Jones, and Thom Yorke. The Bug is Martin’s attempt to prove that he’s a world-class musician in his own right and more than a producer for the stars.  Angels & Devils is The Bug at his best: Kevin Martin composing for Kevin Martin with his own hand-selected collage of singers and rappers to create a brooding and intense audioscape that will alter your whole day.

From a hardware standpoint, Angels & Devils is not an album for your iPod ear buds or your cell-phone speaker. It is layered like an ice fisher in February, so a little speaker can’t convey all the intricate minglings of the industrial synthetics ramping in and out in time with the vocals. You can hear it fine, but Angels & Devils is a calling card for Kevin Martin, the production level is master-warrior class to the seventh degree. So you’d think that since this is his album and he put so much time into texturing backgrounds and developing weird noises that he’d totally gum up the aesthetics of the featured vocalist, but no. The Bug gets what the vocalist is and doesn’t push his perogative. Take “Fuck a Bitch” featuring Death Grips; it has the sound of a record recorded in a BDSM warehouse by a raving maniac, which is classic Death Grips, but it also sounds good. In this instance The Bug took an extremely niched ensemble and produced them into something that nearly any audience can vibe on, lyrics notwithstanding, without ruining the brain hemorrhage inducing modus operandi that Death Grips fans love.

For the whole album The Bug focuses on doing his job and lets the lyricist do theirs without much mucking about on the voice work. Just a little echo effect, some slowing where appropriate, but in all cases the singing artist is recognizable and their style is on point. What this means for the album is that every song is different from the one before, so you can listen to Angels & Devils over and over without getting bored. It’s like the best rollercoaster in the theme park but without the lines or safety restraints: just go until you puke.

Obviously the songs aren’t all alien to each other. There’s a shared motif at the core of each track, a lurking evil like the music is coming out of the hollowed trunk of a dead, black tree in the middle of the kind of forest where people definitely got hanged. Even the happier songs, like “Mi Lost” featuring Miss Red, have a touch of the bleak. Overall, it’s safe to say that Angels & Devils isn’t for your office party, but might work out at your dungeon party.

Though it’s a strong album, it isn’t without its flaws. The worst songs, and that’s a relative term, are the ones that are purely of The Bug. “Pandi” and “Ascension” feature nobody and are straight instrumental tracks, but they’re also kind of boring. Kevin Martin is a producer at heart and, as evidenced by those two songs, he needs a source from which to feed. Through symbiosis, he elevates a track beyond what he or the vocalist could do on their own. Perhaps he isn’t a brilliant soloist, but as part of a team he’s a grand warlock, and that’s what you really want in a producer anyway.

Angels & Devils is both unique and relatable; start to finish it’s a great record. Official release is on August 25th via Ninja Tune with a North American tour to follow.