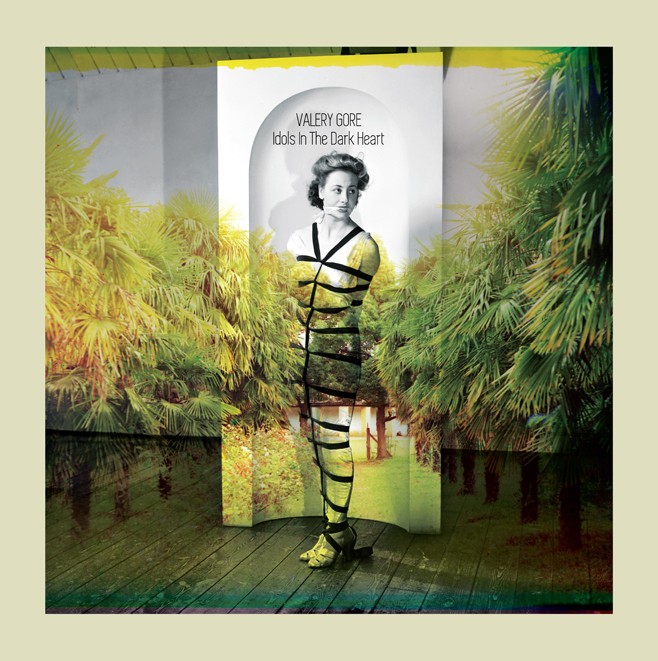 Jazzy with a touch of autobiography, Toronto’s Valery Gore’s new full-length studio album, Idols in the Dark Heart, is an adventurous blend of music styles that take the listener on a trip through the mind of the artist.

The very first track of the album, “With the Future,” pulls the listener’s ears to the speakers within the first few discordant seconds. Gore’s voice comes on alone as the first noise, without any effects or background music, in a tone that sounds like the track cut in mid-sentence. The synth music builds up in the background, but until the refrain the vocals and the beats don’t match up. It’s a strange feeling to listen to a beautiful voice and a melodic tune at the same time, though disjointed. Like looking at a fish swimming sideways, your senses perk up and your concentration focuses. It’s a masterful move because just as you’re about to dismiss the song as bogus, the chorus comes in with the full backing of instruments, beats, and vocal effects, all in time with each other.  She uses this off-time structure in a few other instances throughout the album and it works to grab your attention, but never to excess.

Gore’s jazz piano roots show in most of the tracks, but this is not a jazz album. Her nearest musical equivalent would be something like Bjork—strange and genre bending, but pleasant. In addition to piano and synthesizer she makes use of marimbas, woodwinds, and a drum machine; orchestral instruments and pop instruments that mingle like doctors and day laborers at a costume party.

Idols in the Dark Heart is Gore’s third album and the culmination of four years of effort, but it’s also a soliloquy of a professional musician with ten years experience making albums. Topics like love and longing are discussed and dissected with the usual gravity they deserve, but also with a bit of wit. Like in “Clean Break,” a song whose subject matter is exactly what the title sounds like, she sings, “Sweetheart, you should get a job. Let’s move on…and you can get…a job.” The level of introspection in the album keeps it from becoming a psychiatrist couch, but it’s not so self-conscious as to take the listener away from the emotion in each track, making it a good every-day type of album. Something you can have as a CD in your ’98 VW Passat’s six-disc-changer. The beats are fast and complex enough to not bring you down when you play it as background music and the lyrics give you images to occupy your mind if you’re in the mood to delve into it.

Listening to Idols in the Dark Heart will give you the feeling that somebody went through a lot of work to get those sounds into your ears, and it’s a rewarding sensation. Relatively unknown and definitely underrated, Valery Gore has created a collection that could define her as one of the top indie artists of North America when it comes out this September.