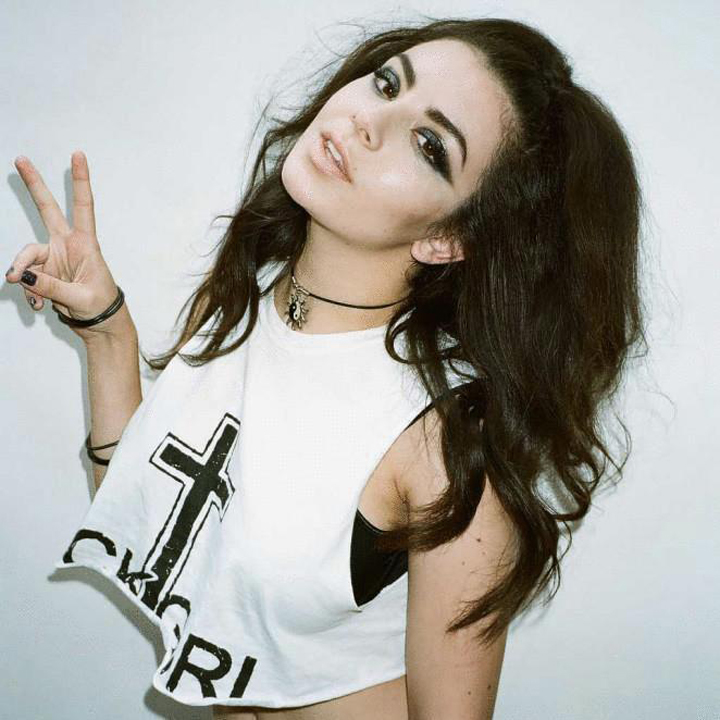 Charli XCX cowrote “I Love It,” know as Icona Pop’s break out song, a fact I was determined to avoid mentioning but as a song with massive radio appeal it became the one the crowd immediately asked for and so it happened. Charli ambitiously performed “I Love It” in her own way. Like the song, Charli was explosive and aggressive in her performance. Her deep vocals were punctuated with fists pumping in the air and a shaking derriere. She owned the song, reveling in the ecstatic pronouncements of the crowd. In her short skirt, platform shoes, and midriff bared, Charli was evocative of teenage years in the 90’s, a decade that’s biggest acclaim is adolescence and nostalgia for childhood.

And that’s where reading Charli’s performance becomes a different story. Her most eager fan was a singing along (to every song), pigtailed, hands in the air, fangirl-squealing late twenties man with a beard and a dark umber on his lips. He knew every word and shouted them passionately like poetry trapped in his aching troubled heart. His performance mirrored Charli’s, the intensity that she gave to the crowd was reflected back by the crowds.

Every inner teenage girl was on display as Charli impelled us to quiver and jump around. Her attempts at adult comments—“I was so hungover I almost didn’t make it out tonight”—felt as overwrought as they sounded, she was playacting an adult and her much older audience was playacting an adolescent. The two were somehow meeting in the middle and finding room to dance. Her encore was just that, a 90s pop song that Charli would have been too young to have even really heard for the first time when it came out, but the crowd instantly reacted to it.

There was an unsettling discomfort at being at a 21 plus venue where the performer is singing to a younger crowd about younger issues, but it didn’t speak to her talent. And then there are the other “but”s: her vocals were aggressive but she didn’t miss a note, her songs are catchy and fun, they don’t spark the imagination but they move an audience to ecstasy, her comments on the stage are often banal but she shows promise for a future filled with talent.

Charli XCX felt at home in Brooklyn, just a suggestion of adolescent aimlessness with a desire to make the most out of any night.