Bonobo is one of those musicians no one talks about unless they find someone familiar with the artist to talk about him with. Admittedly, that’s one convoluted statement, but as someone who’s been following Simon Green’s career for quite a few years I can, without a doubt, say you don’t meet a lot of people who know who he is. Unless, that is, you go to a (pretty much always) sold out Bonobo show and find all of his fans coming out from under rocks into the club lights.

Last Friday was one of those nights, while no one I mentioned my evening agenda to had much clue of who and what the show was about, random strangers at the venue seemed surprised at the turn out and awareness of the artist. Sorry dudes, knowing who Bonobo is does not make you an original, it just means you have good taste in music.

Green has been around for over a decade, his first album, Animal Magic, dropped way back in 2000 and was, as PopMatters puts it, “a lovely little exercise in chill music.” Since then Bonobo has released a multitude of EPs and 3 albums, including critically acclaimed The North Borders, which leaked a couple weeks early – causing a turmoil at the ever so careful Ninja Tune HQ. With each album, he visibly grew as an artist, producing more adventurous tracks, adding instruments and, on occasion, vocals. Green’s latest project is last year’s Flashlight EP, upbeat and lively, three tracks that left his fans yearning for more.

As with most artists signed to Ninja Tune, Bonobo is one of those shows you absolutely have to see live. Humble in nature, unlike the primates after which he takes his name, Green doesn’t talk much or try to entertain, in fact when there is a live band on stage, he’ll stay in the back, giving the instrumentalists the ownership of the stage. The humbleness, however, is not in any way an inhibition. Green has a soft, yet impactful stage presence that excites the audience from the front to the back. 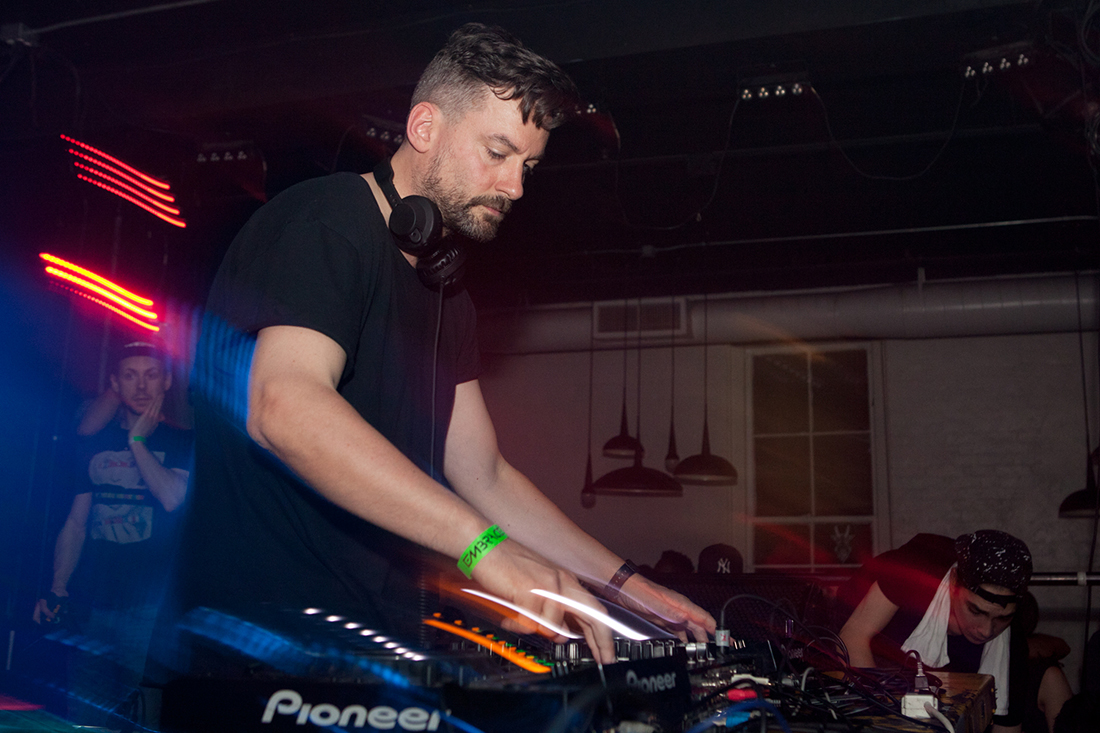 Most recent Toronto show was no exception when The Hoxton opened it’s doors for a Bonobo DJ set for Focus Fridays. The showcase featured three local performers as openers: Bruce Trail, a live performance by The Kount and Sunclef who, though quite different in sound, came together as a solid first half of the evening.

Bruce Trail has fairly recently made an appearance on the Boiler Room for a RBMA Dovercourt Takeover. He played a chill, slightly jazzy set, making a smooth transition to Bonobo in the late hours. The Kount, led by instrumentalist Koal Harrison, appeared as a  surprisingly entertaining 4-piece band (guitar, drums, trumpet and saxophone) playing to a clearly passionate fan base who were shouting out song titles from the front lines. The standout opener was the first one  – Sunclef, likely more so to those of us who grew up in the 90s due to mixing in some of that decades hottest tracks like Fatboy Slim’s “Renegade Master,” Julio Bashmore’s “Battle For Middle You” and, of course, some Sade.

By the time Green came out the crowd got tight, on occasion and in the corners angry tight, so much so one could only wonder how the angry kids found their way into the Bonobo show, but I guess everyone gets turnt at their own speed.

Green played through the favorites across his repertoire as well as some of his genre favorites. Every time a familiar beat came on the crowd went wild. They didn’t have to wait too long for “Flashlight” nor was his set much different from what Green is famous for – a vibrant collection of melodically clean, chill tracks that blast through the speakers as a strong, dance worthy adventure.

More photos can be found here.