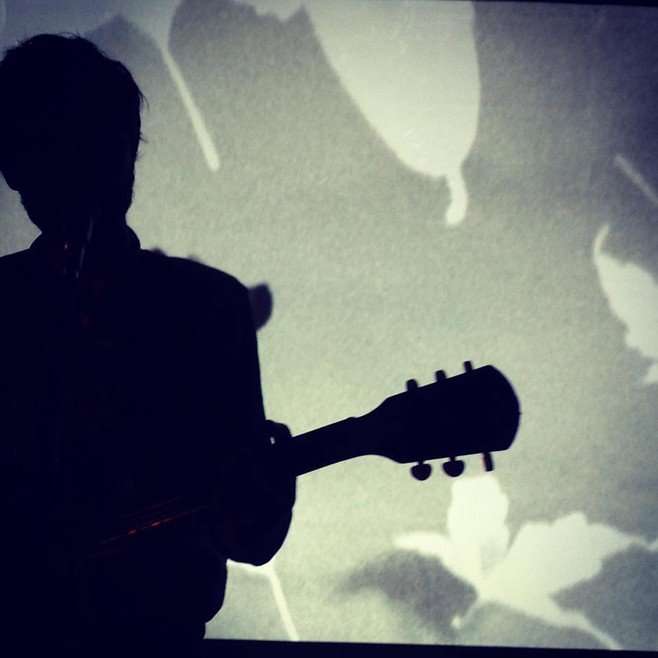 Teen Men are akin to your preferred public access television channel from Delaware. On February 19, they brought their special attraction to the Glasslands in Brooklyn.

The band consists of two former mates from The Spinto Band, one behind the keys and the other the guitar and lead vocals, but both dedicated to the spectacle they’ve created. Teen Men are comfortably uncomfortable onstage, standing in front of a projected image – their accompanying video. The keyboardist sweeps his arm along to the music occasionally, as if saying: “All of this could be yours.” The guitarist plays along with the projected image, dipping down and mocking the guitar on screen or stopping and lifting his guitar over his head like the bodybuilder behind him.

The music is mellow electro-pop, odes to both pre-pubescent themes (Teen) and self-improvement in relationships (Men). The songs are energetic despite the hushed vocals, music to move your body to, in polite sways or by lifting your hands above your head, mimicking the bodybuilder on the screen.

Having a video display accompanying the show allows for the band to create a complete experience. It’s nearly midnight, the crowd has been through three other bands, a little tired on a Wednesday, and then it’s greeted with 30 minutes of delving into different videos from the 80’s, a Miss America pageant, psychedelic interludes of water, along with trippy pop music. The show concludes first by having a shadow version of the guitarist on screen, losing his head several times, each head singing along, and then with a short section describing the mission statement of the band.

Are you a Teen Man? It’s about humor and liveliness, connecting with an audience more than just musically and creating an atmosphere. They pick up on words and bring them back in unusual places for their banter, letting it fill the short time in between videos/songs before moving on.

Teen Men have two songs online. “Hiding Records” is about finding a way to keep secret your love affair for dangerous music. With this song the band implores you to try to dance like Prince or as close to a facsimile as you can. It’s a laid back boogie. The second is your self-improvement, self-love anthem, “René”. “Be certain that your new self will feel old,” they sing along to a bizarre, straight from the 80’s music video.

Teen Men are happy to provide you with public access shows for a low price. Just know that what you’re getting into is an active experience, your participation is required.